Posted in MusicWorld on May 18, 2012 by Ellen Mallernee Barnes 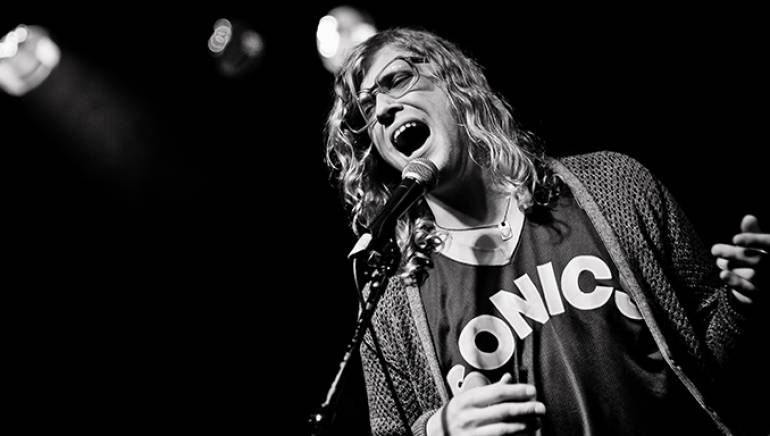 Allen Stone’s brown-sugar-and-melted-butter voice betrays all of his good intentions not to make music that’s just about sex. Not even his granny glasses, rumpled blond hair and cardigans can camouflage the fact: His voice sounds like sex. His self-titled new album is all quivering crescendos and turn-down-the-bed rhythm, which just leaves the 24-year-old Seattle-based soul singer, who’s been compared to Stevie Wonder, Michael Jackson, and Prince, more room to focus on what really matters to him: music that says something.

The son of a minister and an OB nurse — “The joke was always that Mom brought them into the world and Dad sent them out,” says Stone — he found his voice in Chewelah, Washington, home to “about a thousand people, a stoplight, a grocery store and a whole bunch of chewing tobacco.” Two things changed Stone’s life: his introduction to Stevie Wonder at age 15 and his sudden disenchantment with Christianity at age 19.

Well, make that three things. His excellent new album, conceptualized with the help of master producer Lior Goldenberg and made epic by Raphael Saadiq’s rhythm section, turned everything upside down for Stone, converting him from an acoustic guitar-playing, Buick LeSabre-driving one-man show into a full band, sold-out show playing powerhouse. This eruption of success has also changed the way he writes songs. “I’ve learned to be a regimented songwriter,” says Stone, “the kind of songwriter who’s not just waiting for inspiration to strike and lightning to hit.

“I’m looking to write about something beyond sex and love and personal anguish. Don’t get me wrong, there’s nothing wrong with writing songs about sex and romance, but for so many years, soul music had a huge grip on cultural movement. It used to say something, like Marvin Gaye’s ‘What’s Going On’ or Stevie Wonder’s ‘Living for the City.’ Nowadays there’s a huge void. But there are people who want soul music that says something, and I’m one of those people.”