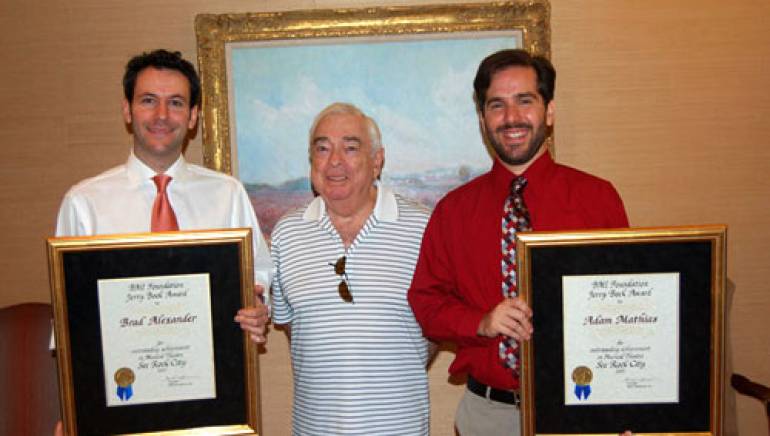 The BMI Foundation, Inc. presented the 2007 Jerry Bock Award for Excellence in Musical Theatre to lyricist Adam Mathias and composer Brad Alexander August 7 at a luncheon held at the BMI offices. Mathias and Alexander received cash awards as well as commemorative plaques for their musical See Rock City. Jerry Bock, a Pulitzer Prize- and Tony Award-winning composer of timeless classics like Fiddler on the Roof and Fiorello, personally selected See Rock City, which was developed in the BMI Lehman Engel Musical Theatre Workshop.

Mathias, a graduate of New York University and DePaul University, received praise for several of his compositions including the New York International Fringe Festival hit, The Passion of George W. Bush; the ingenious Desdemona Lives; and A Long Conversation. Adam is also a recipient of the Jerry Harrington Musical Theatre Award, which recognizes outstanding achievement in the BMI Lehman Engel Musical Theatre Workshop.

Alexander’s music has been featured at the Berkshire Theatre Festival, the New York International Fringe Festival, and VH1. His compositions include the music for Theatreworks USA’s Just So Stories and Lilly’s Big Day. Brad holds memberships with the BMI Lehman Engel Musical Theatre Workshop, the National Academy of Popular Music and the Dramatics Guild.

See Rock City is a collection of short musicals set at tourist destinations across the country, from Rock City, Georgia to Niagara Falls, stopping off at Coney Island, Route 66 and the Alamo. Each landmark introduces a new set of characters struggling to connect, to move past their fears and expectations in order to fully engage with each other. A young man searching for his place in the world believes his destination is written on the roofs of barns along the North Carolina Interstate. A young woman, afraid that she may be jumping too hastily into marriage, gets a helpful push from a mysterious tour guide. Two boys playing hooky from high school take the Q train to Coney Island only to find that the Spook House reveals greater fears than they ever expected. Every story stands alone, yet builds on its counterparts to create a complete evening of musical theatre.