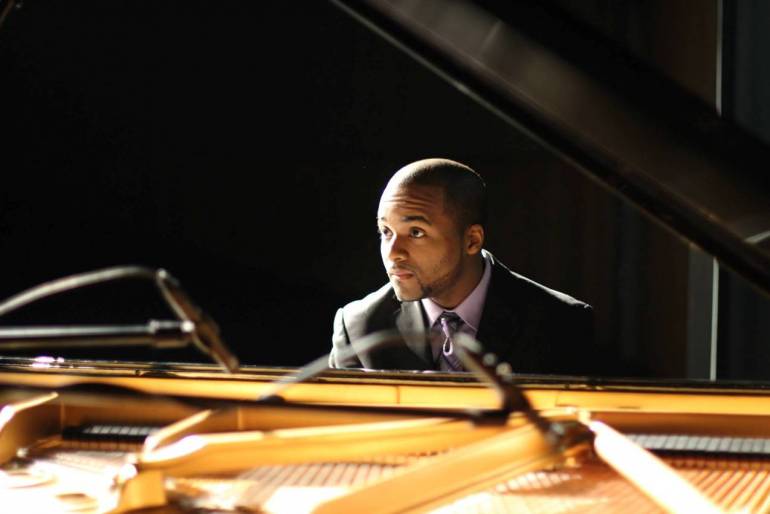 The first thing you think of when reading native New Orleanian Sullivan Fortner Jr.’s career bio is, “Is there anything this guy can’t do?” When most kids were annoying their parents by opening and closing the lid on the piano, he began playing music by ear at the age of seven. At nine he was playing for church choirs throughout New Orleans and by the time he was 11, Sullivan had won a Cox Cable “Amazing Kids Award.” At 13, he attended the New Orleans Center for Creative Arts (NOCCA) and earned scholarships to several incredibly prestigious summer jazz programs, including the Vail Jazz Institute and the Skidmore Jazz Studies Summer Program. Also valedictorian of his high school class (now you see what we mean about being able to do anything), he simultaneously graduated from NOCCA, holds a Bachelor’s degree in Jazz Performance from Oberlin Conservatory of Music, his Master’s degree in Jazz Performance from Manhattan School of Music and has toured with Stefon Harris & Blackout, Christian Scott Quintet, and the Roy Hargrove Quintet. He’s also worked with the Marsalis Family, Donald Harrison, Nicholas Payton, Billy Hart, Gary Bartz, Marcus Belgrave, the Jordan Family, Irvin Mayfield, Peter Martin, Dave Liebman, and a host of other big names.

Now he’s won the 2015 Cole Porter Fellowship in Jazz, presented by the American Pianists Association. How much further can he go? BMI asked him about how he’ll spend the $50,000 grand prize, what this newest honor means and where he hopes it’ll take him.

Tell us about the opportunity to record for Mack Avenue Records and the two years of professional career services and development you’ve been awarded by winning the Cole Porter Fellowship.

I am extremely honored to have this privilege of winning this prestigious award. As for recording with Mack Avenue, I recently signed with Impulse Records before even finding out I was nominated as a finalist for this Fellowship. I recorded in November of 2014, and it will be released September of this year. However, I hope that some of the prize money will help in promoting this record.

Why did you choose Cole Porter’s “Just One of those Things” and Thelonious Monk’s “I Mean You” for the competition? What were you hoping to achieve?

I actually did not choose those songs… Those songs were chosen for me by the “powers that be”... The “I Mean You” arrangement was based off an arrangement of that tune, which I recorded on my audition CD for the competition. Brent Wallarab chose that piece, and made a great big band arrangement of it. I’m not sure who chose “Just One Of Those Things.” All I was told was the key and the tempo before I met with Dianne Reeves to rehearse. At our first rehearsal, she asked me how I heard it, I played something, she said she liked it, and I didn’t change the feel for the performance. The performance was the first time we played the whole thing together.

Finalists for the Fellowship were selected through a process of blind submissions so although your resume didn’t officially play into your success, what part of your experience did you channel that you feel clinched the honor for you?

I guess experience has taught me to be myself and just play the music… Not to overplay, but to support the other musicians as best as I could. Also to ‘sing’ through my instrument… I just tried to make music.

You’ve toured and played with so many talented musicians; tell us about some of those experiences playing in clubs exclusive to jazz. Is there a different vibe than playing a jazz night at a club that may feature other genres on other nights?

There is a certain vibe that you get as a jazz musician playing at a club that is specific to jazz. Especially a historic venue as the Blue Note in New York, Smalls Jazz Club in New York, Snug Harbor In New Orleans, or the Village Vanguard. Those venues carry so much history it almost feels as though you are a part of a jazz history. So, yes, I feel that there is a difference in playing in venues specific to jazz as opposed to a venue that features jazz non-exclusively.

What’s your favorite venue to play?

My favorite venue is probably the Village Vanguard because of the sound of the club. The sound on that stage is incredible.

What are your plans for the $50,000 and what does it mean to you in terms of achievement?

I haven’t made definite plans, but I am sure that some of it will go to studying music in a foreign country. I would love to study in Ghana, or maybe even go back to India for a little while and study there. I also hope to set up different opportunities in regards to touring, promoting the new CD, and preparing the next record.

I joined BMI after consulting with other musician friends. Everybody told me, BMI is the best. So I signed up, and I haven’t regretted my decision, and as far as I am concerned, I don’t think I ever will.