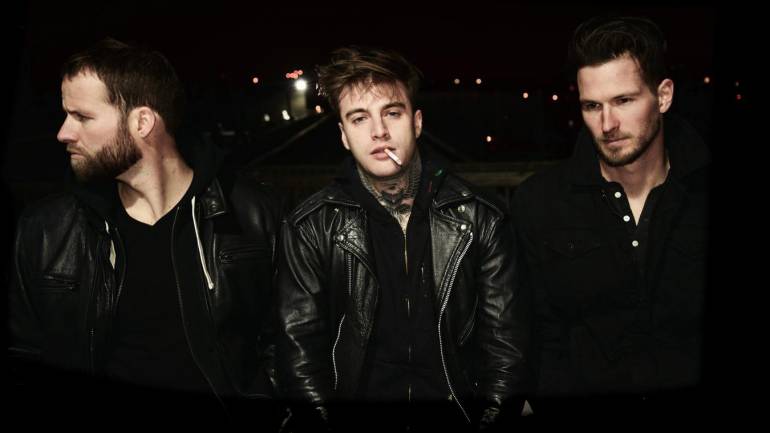 Pairing Johnny Stevens’ impassioned voice and uncompromising lyrics with thick, bluesy guitars and sinewy grooves, Highly Suspect is a tight power trio that honed its sound in basements and barrooms. Headstrong and full-throttled, the band – comprised of vocalist/guitarist Stevens and the fraternal rhythm section of bassist Rich Meyer and drummer Ryan Meyer – decamped to New York City from their native Cape Cod, MA, in 2011. In Brooklyn, it all started to happen.

We caught up with Highly Suspect’s Johnny Stevens to ask him about his band’s sound, ambitions and their steady ride into the limelight.

It’s a long way from the beaches of Cape Cod to the stage of the GRAMMY Awards. What was that experience like?

Magical, surreal, humbling… These are all words that could be used to HELP describe the feeling, unfortunately no words can actually capture the feeling completely. It’s something only a GRAMMY performer could know. We have to internalize it. It was awesome.

Were the GRAMMYs something you were aspiring for? Did you think a GRAMMY recognition was ever on the menu?

Definitely. Who doesn’t want to be recognized by their peers for their work. Some people may claim that they don’t care, but that’s not us. And it’s not over. We want to take one home.

Your music has progressed significantly, over three EPs and two albums. How did your approach to making Mister Asylum differ from those previous efforts? Have you started writing for the next record as yet?

Mister Asylum is an album that will never be repeated. It represented a certain era in our lives. It had to come out. We’re very glad that it did, when it did.. But now it’s time to move on. The next album will be different, and yes, we have begun writing the songs.

You’re playing rock in an era that seems more geared towards other genres. What’s your take on where rock is now? Where is it headed?

I don’t know and I don’t care. I don’t think of music in those terms. Music is music… People need to clarify it for their own brains and I guess that’s fine. Rock and roll will always be a thing no matter how popular or unpopular it may be in the mainstream. I’m not even sure this next album will be considered rock. But the songs, the lyrics, they will remain honest and we will remain true to ourselves as artists and songwriters.

What is it like having a pair of twins in an already intimate trio?

I wouldn’t know what to compare it to. Makes it easy to remember their birthdays.

How important has your relationship to BMI been to your career?

It’s been extremely important. I always recommend to my musical friends that they become affiliated with BMI should they get the chance. You guys have been behind us now for three years, inviting us to different stages and helping to nurture and foster our career. We have a personal connection with a lot of you since we’ve been able to hang out over the years. I’m looking forward to a long and serendipitous relationship with BMI.