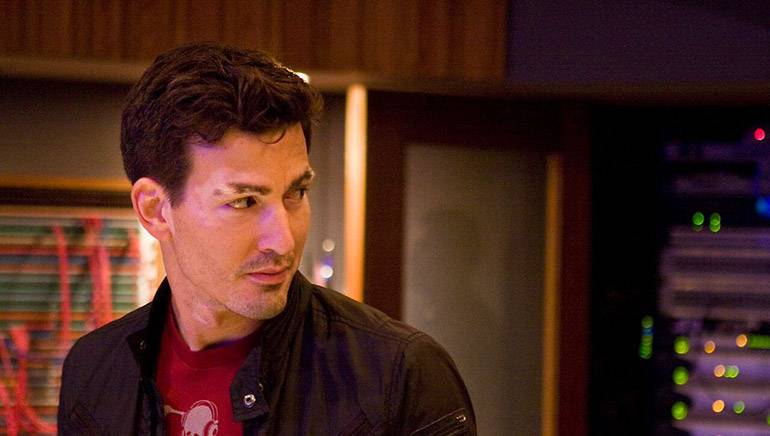 Since its debut in 2011, MTV’s wildly popular drama Teen Wolf has gripped fans through four intense seasons of werewolves, witches, demons and more, pairing creepy, knuckle-biting scenes with equally terrifying music. The man behind the score, Dino Meneghin, grew up playing music, then cut his teeth touring, spending time on the road with top recording artists such as Michael Buble, Josh Groban and Liz Phair. After leading music production for a two-season run of MTV’s music reality TV show, Taking The Stage, he made the jump to the scripted screen, upping the ante on the bone-chilling feeling viewers get while watching the award-winning series. We caught up with the captivating composer a few weeks before the June 29 2-hour season 5 premiere, to get his thoughts on writing rituals, advice for new composers and staying inspired throughout the years.

1. What is your writing process like for Teen Wolf? How does an episode come together for you?
We usually have a spotting session on a Monday with Jeff Davis and a few of the other producers, along with the editor whose episode it is. I then scurry off to write the show, and we present first versions a few days later. Then, we make any changes that might be requested, and send them off to the mix.

2. Do you have any rituals for writing to get in the right mindset?
Unfortunately, I don’t usually have enough time for something like that when I’m working on a weekly series. If I’ve got some lead time, I always ask for scripts or set photos or artist renderings to help inform my writing.

3. How do you stay inspired? Especially after a project has gone on for multiple seasons, as Teen Wolf has.
I always try to incorporate at least one new “big” idea into each season, whether it’s a new instrument I’m learning, or perhaps a new compositional or synthesis technique. I like to always make sure that I’m keeping a steady flow of fresh ideas coming in and out of the studio. That includes being diligent about going out to see live music and checking out new records. My wife and I are season ticket-holders for the LA Master Chorale, and there’s so much good music on their program this year. I’m really counting on the inspiration!

4. Tell us about your experience as music director for Taking the Stage. What did you bring to Teen Wolf from that experience?
That was a really rewarding experience on a personal level. Reality/documentary television gets a (mostly well-deserved) bad rap, but I was lucky to have participated in that one. What I took from that show was a lot about being ready to cover anything and not getting hung up on my idea about what needs to happen. When we were working with those kids, there was obviously a story the producers were following, and the performances had to follow that. Sometimes, I’d put in a ton of work on something, and it would get axed at the last minute. I couldn’t get hung up on it because everything was happening in real-time for us, so I’d just have to move on to the next thing. It can be really liberating to work that way.

5. What are you listening to lately?
I got turned on to Mohammed Fairouz recently, whom I’ve really been enjoying. Royal Blood and the Dead Ships are two bands I’m really liking as well. I got back into the last Flying Lotus record after being off of it for a few months, just because it’s so good.

6. What’s on the horizon for you?
Nothing I can talk about now, but I have some really exciting stuff planned for the fall!

7. What advice do you have for aspiring composers?
Study your craft, and do good work. There has always been, and there will always be, room for people who do good work and are normal human beings who are nice to be around. If you’re a genius, you don’t need to worry as much about the ‘nice to be around part,’ but I’d still do it just to be safe.

8. Tell us about your relationship with BMI.
I LOVE BMI! When I first got into writing for picture, a good friend of mine, who was much further along in his career in film, told me I should talk to Doreen Ringer-Ross and introduce myself to the folks in the TV/Film department. I was just so blown away by her and just by the whole film/tv department. Everyone really cares not only about the music, but about the people who make it. It really feels like having an ally in business where those can sometimes be hard to come by. I’ve done several BMI panels that Anne Cecere was involved in, and she’s genuinely one of my favorite people. She’s always out there as a part of the music-making, not just at panels and award shows, but at the sessions as well. These are all people who really care about film music. Mike (O’Neill), Ray (Yee), Doreen, and Anne are just amazing in their advocacy for composers. It’s really great being a part of something so positive and so beneficial for everyone from new composers to bonafide legends.