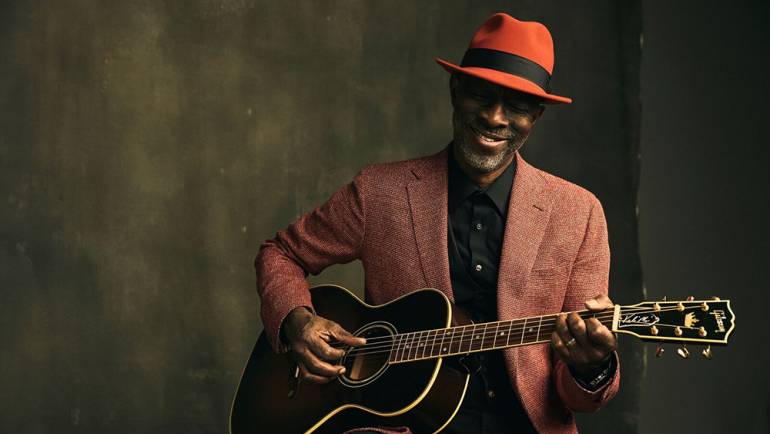 Keb’ Mo’ has had a busy year and he’s showing no signs of slowing down. In June, he released his fourteenth studio album, Oklahoma, featuring contributions from Taj Mahal, Robert Randolph, Rosanne Cash (who joined him on lead single “Put a Woman in Charge”), and his wife, Robbie Brooks Moore. The critically praised project, which candidly explores topics including mental health, immigration and environmentalism, recently earned the revered artist his 12th GRAMMY nomination.

Then in October, he released his first Christmas album, Moonlight, Mistletoe & You (Concord Records). Produced by Keb’, this feelgood album offers four Christmas favorites and six original songs including the tongue-in-cheek “Christmas Is Annoying” and the romantic title track. Keb’ will bring his “Jingle Bell Jamboree Tour” throughout the East Coast and the Southeast before taking a break for the holidays, and then he hits the road again in Europe, the U.K. and India.

Born Kevin Roosevelt Moore, Keb’ Mo’ (a nickname the artist has used professionally for decades) nimbly blurs the lines between blues, jazz, Americana, pop and folk, reflecting his own deep appreciation for different styles of music. The four-time GRAMMY winner was born and raised in California, where he built his music career playing in various bands and working as a staff writer for A&M Records. A multifaceted artist, he has appeared onscreen as an actor, notably portraying Robert Johnson in the documentary film Can’t You Hear the Wind Howl? and a blind guitarist in John Sayles’ 2007 film Honeydripper. He and his family are now based in the Nashville area.

We caught up with Keb’ to talk about his most recent album releases, his musical inspirations, and the philanthropic projects he’s passionate about.

Your album Oklahoma was just nominated for a GRAMMY for “Best Americana Album” – congratulations! What does it mean to you to be recognized by The Recording Academy again?

Every time I get a GRAMMY nomination, I’m EVEN MORE grateful, even more humbled and honored. Over the years, as I’ve been around, I realize how difficult they are to get. I’ve been around a long time and I’m especially grateful that people are still listening, and I still have the privilege of being heard. I’m also really grateful that people are acknowledging that what I do is not strictly Blues. It’s rooted there but I tend to use ALL my past influences in some way. They sneak out.

Moonlight, Mistletoe & You is your first Christmas album. What inspired you to make a Christmas record at this point in your career?

This Christmas record is made up of many inspired moments that happened over 15, maybe 20 years. Songs that were written intermittently over time and it grew out of the daily process of making music, writing, and being involved every day. I can’t say there was one moment. Each song has its own unique origins, life, and breath to it.

Tell us a bit about the tour you’re doing for it before the holidays.

We are really excited about the record, so we thought we’d go out and have fun with it and see if anyone else likes it, too. It’s a mix of songs from the album but also some of my anchor songs from my career — the ones that people often ask for. I have a great band behind me including my son, whose stage name is K. Roosevelt when he’s doing his regular thing. He’s also a really, really stellar drummer and he reads my mind, which is great. There will be some fun attire. It’s a Jingle Bell Jamboree.

The album includes six original songs and four covers. How did you decide which songs to cover?

We reached out to fans and asked what they would like to hear me do. From that we chose “Merry, Merry Christmas” by Koko Taylor and “Santa Claus Blues,” which is a Charley Jordan song from the 1920s or 30s. The Irving Berlin song “I’ve Got My Love To Keep Me Warm” was actually picked by Melissa Manchester [who duets on the track] and we recorded it about 13 years ago. “Please Come Home For Christmas” was just an obvious choice to me. It’s a classic. It’s in my key. Everyone knows it.

The video for “Christmas Is Annoying” must have been fun to shoot – can you explain how this song and video came to be?

Again, the song was written about 10 years ago. My good friend Elaine Dempsey came to visit us right when we moved to Nashville. We sat down to write, and it was a melding of two different perspectives about the holidays and the hijacking of the holiday by commercialism. The video began with my wife’s vision and was greatly expanded on by Andrew Rozario, the director, and his wife, Brenna. They came up with the concept of the switched roles with the kids. I just had to play along with their vision, and it was pretty funny. Many ugly sweaters were purchased by our team.

You run a label/management/artist development company, Kind of Blue Music, with your wife. Tell us a bit about why you started it and what your goals are.

I hate to tell you, but I don’t run that. My wife runs it. We started it at a time when we felt it was smart to have our own distribution. I was producing a few artists and releasing my own albums. Robbie had music and business experience and it really helped us to be better when we learned the label side of things. Now we have a better understanding and we can make wiser choices. It’s been a great portal to help our business be flexible and the goal is pretty simple: to spread joy and happiness.

You’ve said you describe yourself as a cross between Taj Mahal and Bonnie Raitt, because those were the people you looked up to in terms of how to craft a career and be authentic to yourself. Who are some of your other musical inspirations?

You’ve been playing music professionally since the 1970s. What advice would you give to a musician who is just starting his or her career path now?

If you love it, stick with it. I just kept going ’til they couldn’t ignore me. Also, gratitude, and you gotta be just a little bit crazy.

You’re passionate about music education. Can you explain what kind of music programs Kind of Blue Music supports through the Playing for Change Foundation?

We actively participate in and donate to both the Playing for Change Foundation, which helps to build music schools and provide community support around the world, as well as the Kennedy Center’s Turnaround Arts program. That program was started under the guidance of Michelle Obama and has been very successful in helping underperforming schools to add the arts into their regular curriculum. Mentors like myself, and people like Alfre Woodard, Frank Gehry, Valerie June, and Josh Groban spend time with the kids and try to inspire the best we can. Both things have been way bigger gifts to me than I think I could ever be to them.

How did you start working with BMI and how has it impacted your career?

I’ve been working with BMI since 1971. BMI has always been there with me with information, support, and of course, payouts. I’ve developed close friendships with the people that were so supportive of me there. They’ve been an important part of keeping my business running and keeping track of my catalogue. I’m very grateful.