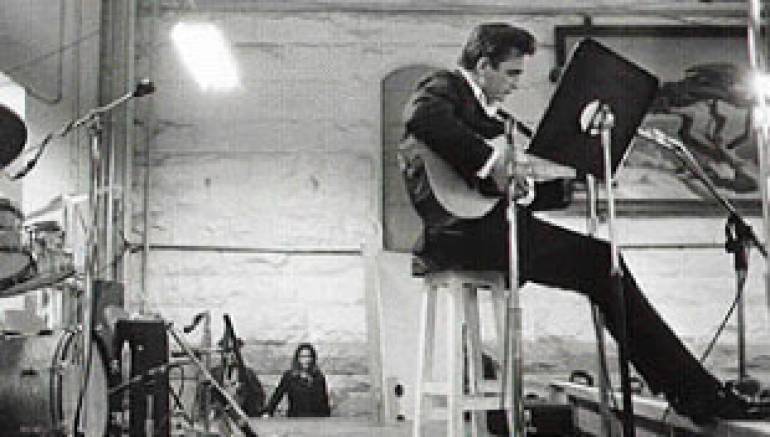 In January 1968, America was quickly coming apart at the seams. The war in Vietnam had boiled over, hastening President Lyndon Johnson’s demise and creating a firestorm of political tension. As rock music increasingly became the voice of dissent, Nashville, the acknowledged seat of social conservatism, stood in sharp contrast with its tales of drinking, divorce and redneck mayhem.

Few knew about the raucous side of life better than Johnny Cash, who’d had his share of booze and bruises during his first dozen years in the business. Not surprisingly, some of Cash’s most ardent fans were America’s most dangerous criminals. “By that time, I’d been doing prison concerts for more than a decade,” recalled Cash in “Cash: The Autobiography,” “ever since ‘Folsom Prison Blues’ got the attention of the inmates at the Huntsville, Texas, prison in 1957?those shows were always really hot. The inmates were excited and enthusiastic, and that’s what got me going.”

Cash was still on the jail trail in 1967 when he approached his label, Columbia, with the idea of cutting a live album from inside one such correctional facility. After years of losing ground to substance abuse, Cash began 1968 clean and sober and ready to make a major statement. His concept, however, was initially rejected by Columbia’s top brass. Enter producer Bob Johnston, who convinced the label that a Cash-with-captives collection was worth a shot, especially since the cost of carrying off such an endeavor would be minimal. (Despite its frugal reputation, at the time, Columbia was a major proponent of remote recording and gave its engineers free rein to tape live dates using gear trucked in from its various facilities.) On January 13, 1968, Johnston, armed with a pair of four-track recorders and a bag of Shure microphones, headed off to Folsom Prison, the hardball correctional facility located 100 miles east of San Francisco. There he was joined by Cash, along with backing band the Tennessee Three (guitarist Luther Perkins, bassist Marshall Grant and drummer W.S. Holland), and vocalists the Statler Brothers, as well as Cash’s wife-to-be, June Carter.

It would be a gig like no other. Shortly before show time, a crowd of 2,000 potentially violent inmates gathered inside the prison’s thunderously reverberant cafeteria with armed guards taking aim from the catwalks overhead. Moments later, Cash, clad in characteristic black and cradling his acoustic guitar, strode onstage and approached the microphone. As Johnston later told writer Dan Daley, “I think the most important thing I did on that recording was, instead of having an announcer work the audience up, I told Johnny to just walk out there and say, ‘Hello, I’m Johnny Cash.’ You can hear the explosion after that.”

The cafeteria’s highly reflective concrete walls presented an immediate challenge for Johnston and his engineer, Charlie Bragg. “It was way too live in there for any real ambient miking,” says Johnston, who instead placed most of the microphones on stage as close to the musicians as possible. “In some instances, we used several mics on each player. There wasn’t any EQ’ing, either - we just went straight out to the recorders from there.”

Despite having several reels of tape from which to choose, Cash’s master takes were cut from the main reel only (a 1999 Sundazed reissue utilized takes from a second reel), perhaps an indication of how stunning the performances were upon first listening. From start to finish Cash never lets up, delivering classic renditions of “Jackson” (a fabulous duet with Carter), “25 Minutes to Go” (a darkly humorous tale of a convict’s last moments before his execution), as well as the ballad “Green, Green Grass of Home,” with unparalleled conviction. But the clincher was “Folsom Prison Blues,” the song that had launched Cash’s career 12 years earlier. To this day, the knowing cheer that follows the line “I shot a man in Reno, just to watch him die” remains one of the most eerie moments in live recording. “There are scenes as sharp in my memory as if it were last night,” Cash later recalled. “The reaction from the cons when I introduced myself, the pain and hopelessness of a soul beaten down, of failure, of failure to stay free of the system, of failure to be able to ignore today’s pain. But there was no calendar inside the cafeteria on that day, January 13, 1968.”

As it turns out, Columbia’s reticence was unfounded. Issued on March 1 - the same day Cash and Carter were wed - At Folsom Prison became an instant success, going gold by year’s end (and achieving multi-platinum status shortly before Cash’s death in 2003). On the heels of the crossover smash “Folsom Prison Blues” (which hit No. 1 on the country charts), record companies by the score began hauling tape machines in and out of correctional facilities in order to capitalize on the trend. Among the many artists who went from working the bar crowd to the behind-bars crowd were Big Mama Thornton, B.B. King and, of course, the Man in Black himself, who repeated his feat a year later with the million-selling “A Boy Named Sue,” recorded live at San Quentin.