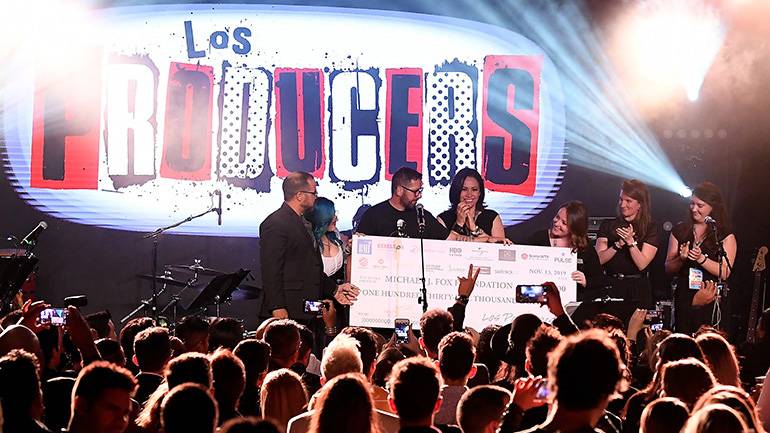 BMI and Rebeleon Entertainment recently presented the 9th annual Los Producers charity event at the Hard Rock Café on the Las Vegas Strip. The star-studded lineup included more than two dozen recording artists and producers who shared the stage to raise more than $135,000 for The Michael J. Fox Foundation for Parkinson’s Research, which is dedicated to accelerating a cure for Parkinson’s disease and improved therapies for the millions of patients and families around the world impacted by the condition today.

This year’s event brought in a full house, which included a mixture of industry tastemakers and music creators. The evening kicked off with many of this year’s Latin GRAMMY Award nominees including Luis Fonsi, who performed an energized rendition of “Summer Of ‘69” by Bryan Adams, and Cami, who delivered a beautiful version of Radiohead’s “Karma Police.” Additional 2019 Latin GRAMMY Award nominees graced the stage including Tommy Torres for a stirring take on George Harrison’s “While My Guitar Gently Weeps” by The Beatles, while Ximena Sariñana put her spin on Sinéad O’Connor’s “Nothing Compares 2 U” originally penned by Prince. Luis Enrique, with C4 Trío, turned up the rhythm for “Mi Tierra” by Gloria Estefan, Gian Marco performed a powerful version of Los Rodriguez’s classic, “Sin Documentos” and Kevin Johansen excited the crowd with his cover of “11 y 6” by Fito Paez. Greeicy further ignited the evening with her interpretation of Carlos Vives’ “Pa’ Mayté”and Aitana performed Oasis’ Britpop ballad, “Wonderwall.” Flor de Toloache gave an electric performance and covered a medley of hits such as “Sign My Name” and “I Wanna Dance With Somebody.”

Other highlights included Cali Y El Dandee (“La Quiero a Morir” by D.L.G.), Los Executives (“Song 2” by Blur), Paty Cantú and Lasso (“Don’t Speak” by No Doubt), Kali Uchis (“All That She Wants” by Ace of Base ), Fito Paez (“Yendo De La Cama Al Living” by Charly García), Morat (“Basket Case” by Green Day), Georgel and Camila Fernandez (“Lovefool” by The Cardigans), Leonel García (“Come As You Are” by Nirvana) and Chesca (“You Oughta Know” by Alanis Morissette).

Throughout the night, 2019 GRAMMY Award nominee Andrés Torres backed several performances on the drums and Ali Stone provided a blend of festive DJ mixes to keep the packed house dancing into the early hours of the next day.

Over the course of the last nine years, Los Producers has provided hundreds of thousands of dollars to numerous charities, such as St. Jude Children’s Research Hospital, Education Through Music, City of Hope and Help Me Rebuild La Perla Foundation, among others.