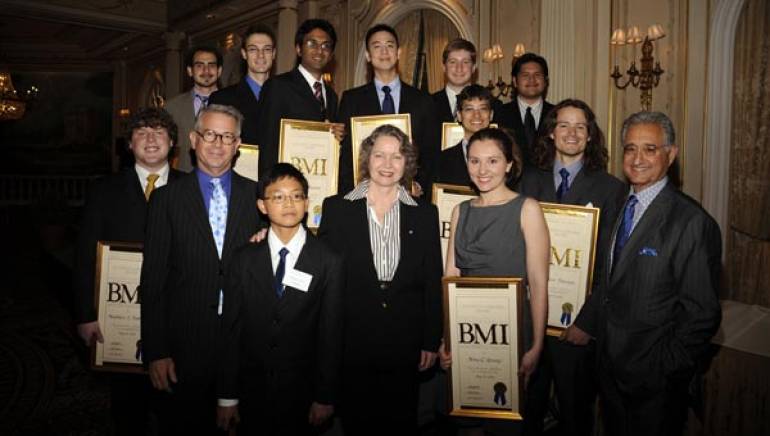 The BMI Student Composer Awards recognize superior creative talent and winners receive scholarship grants to be applied toward their musical education. In 2010, more than 500 manuscripts were submitted to the competition from throughout the Western Hemisphere, and all works were judged under pseudonyms. Cash awards totaled $20,000. The Carlos Surinach Prize, awarded each year to the youngest winner in the competition, went to Yeeren I. Low.

More About the Winners:

Andrew S. Allen was born in 1985 in Pittsburgh, Pennsylvania and currently lives in La Jolla, California, where he is pursuing a PhD at the University of California San Diego. His composition teachers include John Fitz Rogers, Carlos Sanchez Gutierrez, Ricardo Zohn-Muldoon, Robert Morris, and Lei Liang. He received a B.M. degree from the University of South Carolina in 2007 and a M.A. degree from the Eastman School of Music in 2009. Allen is a UCSD Magellan Scholar and is the recipient of the Anthony and Carolyn Donato Prize, first prize in the 2008 APSU Young Composers’ Competition , the 2010 NACUSA Young Composers’ Competition (1st Prize) and honorable mention in the Frederico Mompou International Award,. His works have been recently performed in New York at the Galapagos Art Space and The Stone, and at the Conrad Prebys Concert Hall in La Jolla. His BMI award-winning work was written for the members of the Rochester-based Fracas Quartet, which will premiere the work in the summer of 2010. Composer’s website: http://www.andrewstewartallen.com/

Paul Dooley was born in Santa Rosa, California in 1983. In 2006, he received a B.M. degree in composition and a B.A. in mathematics from the University of Southern California, and in 2007 he received a M.M. degree in composition from the University of Michigan, where he is currently pursuing a DMA. He has studied composition with Evan Chambers, Michael Daugherty, Frank Ticheli, Frederick Lesemann, Stephen Hartke, Charles Sepos and Doc Collins. Dooley is the winner of many awards and prizes including the 2010 Pacific Symphony American Composers Competition, a “Young Artist Award” from the American Philharmonic, a Michigan Music Teachers Association Commission, and many others. His music has been performed by the Atlantic Classical Orchestra, the Pacific Symphony Youth Wind Ensemble, and at the University of Michigan Art Museum. Upcoming performances are scheduled by the American Philharmonic, Alarm Will Sound, the Mizzou New Music Festival, and with choreography at the Marina Abramovic Institute West. His BMI award-winning work was premiered by cellist Paul Dwyer who has presented the work at the University of Michigan, Brooklyn’s Linger Café and Lounge, the Archer Ballroom in Chicago, and in many other venues. Composer’s website: http://www.pauldooley.net/

Eric Guinivan was born in Wilmington, Delaware in 1984. In 2006, he received both a B.M. in composition and a B.M. in percussion performance from Indiana University, followed by a M.M. degree in composition in 2009 from University of Southern California, where he is currently pursuing a DMA. He has studied composition with Stephen Hartke, Donald Crockett, P.Q Phan, Claude Baker, Tamar Diesendruck, Don Freund, and David Dzubay and his principal percussion teachers include Gerald Carlyss, Anthony Cirone, and Erik Forrester. He was a BMI Student Composer Award-winner in 2007 and has received USC’s Most Outstanding Graduate Award in 2008, a 2010 Presser Foundation Music Award, 2nd Prize in the 2006 Quey Percussion Duo Composition Contest, and was the recipient of the USC’s Alfred Newman Music Scholarship, the Sadye J. Moss Endowed Musical Composition Prize and the Hans J. Salter Endowed Musical Composition Prize. Guinivan’s music has been performed in Indiana, California, Missouri, Illinois and Delaware. Orchestra performances have featured the USC Thornton Symphony performing with the composer as soloist, the Young People’s Symphonic Orchestra (St. Louis), and the Delaware Youth Symphony Orchestra. Active as a percussionist, he has performed with the YMF Debut Orchestra as Principal Timpanist, the Columbus Indiana Philharmonic, the American Youth Symphony (Los Angeles), and with the orchestras and new music ensembles at both Indiana U. and USC. Guinivan’s BMI award-winning work was premiered at Chapman University at the 2010 Annual Percussion Symposium by the Los Angeles Percussion Quartet, and subsequently performed on a West Coast tour. Composer’s website: http://www.ericguinivan.com/

Matthew Hatty was born in Trenton, Michigan in 1988. In 2010 he received a B.S. degree in Music from Hillsdale College, where he was the recipient of the John and Dede Howard Scholarship for Music.
He has studied composition with Mathew Fuerst and Christopher Dietz. As a trumpet player, he has performed with Big Band, Jazz Combo, Orchestra, Trumpet Ensemble and Pep Band at Hillsdale College, where he has also conducted chamber works in performance and choral and orchestra works in readings. In the past year, he has begun singing and has participated in the College Choir, Chamber Choir, and Opera Workshop. He has been commissioned and performed by members of the faculty at Hillsdale College and has enjoyed many performances of his jazz, chamber and solo works in student performances.

Yeeren I. Low was born in 1997 in Chapel Hill, North Carolina and currently lives in East Stroudsburg, Pennsylvania. He attended the Sterling Montessori Charter Academy, the Gratia Dei Christian Academy and is currently enrolled at the Pennsylvania Cyber Charter School and the Juilliard Pre-College Division, where he majors in composition and studies piano and violin. His composition teachers have included Ira Taxin and John Ruggero and he has studied piano with Jennifer Hancock, John Ruggero and Zitta Zohar. He has studied violin with Karen Moorman, Emily Steele, Mary Frances Boyce, Richard Luby, Yoram Youngerman and Isaac Malkin. Low has performed as a violinist with the Piedmont Youth Junior Orchestra and the Mallarme Youth Chamber Orchestra and has been featured as a soloist with the Winston-Salem Symphony, and the Raleigh Civic Symphony Orchestra. As a performer, he has won 1st place in the Junior Division of the Peter Perret Youth Talent Search in 2005 and 2006 and as a composer he has won a BMI Student Composer Award in 2008 and awards in the National Federation of Music Clubs Junior Composers Contest in both 2005 and 2006. Low’s music has been performed by several chamber ensembles at Juilliard and read by the Ciompi Quartet at Duke University and the Juilliard Pre-College Symphony. Composer’s website: www.thelowbrothers.com

Igor Maia was born in Campinas, Brazil in 1988 and currently lives in The Haag, Netherlands. He is a student at the Royal Conservatoire of the Hague and will receive a B.M. degree in composition with a minor in music theory in June, 2010. His composition teachers include Frederick Carrilho, Patrício da Silva, Raul do Valle, Jônatas Manzolli, Denise Garcia, Cornelis de Bondt, Diderik Wagenaar, Gilius van Bergeijk, Martijn Padding, and Patrick van Deursen. Maia is a violinist and has studied with Alexandre Chagas, Fabrizzio Ribeiro, Esdras Rodrigues, and performed as member of the violin section of orchestras such as University of Plymouth Orchestra (England), University of Campinas Youth Orchestra (Brazil), Nazarene Philharmonic (Brazil), Royal Conservatoire Student Orchestra (Holland) and ensembles of contemporary music in Brazil and The Netherlands. He has been a finalist in the Holland Youth Orchestra’s 18th “Project Jonge Componisten,” the 9th Composition Competition of the Brazil-USA Institute, and the Nieuw Ensemble’s 2009 Brazilian Composers Competition. His works have been performed by the Plymouth (England) University Symphony Orchestra, the Unicamp Youth Orchestra in Brazil, the Campinas (Brazil) Symphony Orchestra, and at the 2007 Gaudeamus Music Week in Amsterdam. His BMI award-winning work will be premiered in July, 2010 by the Symphony Orchestra of Campinas (OSMC) under Maestro Karl Martin.

BMI award-winning work: Reflections on the Death of the Beloved for symphonic band

Matthew Peterson was born in 1984 in Grand Forks, North Dakota and currently lives in Sweden, where he attends the Gotland Tonsättarskola from which he will receive a “Frikonst” diploma in 2010. Previously he attended Indiana University where he received a M.M. degree in composition in 2008 and St. Olaf College where he received a B.M. degree in theory and composition and a B.M. degree in double bass performance in 2006. He has studied composition with Per Mårtensson, Henrik Strindberg, Sven-David Sandström, Claude Baker, Justin Merritt, Timothy Mahr and Mary Ellen Chiles, and has studied double bass with Paul Ousley and singing with Dan Dressen. Peterson served as principal bassist with the St. Olaf Orchestra and St. Olaf Choir and has performed as a singer and electric bassist with jazz, rock and reggae groups throughout Sweden from 2008 to the present. In addition to a 2007 BMI Student Composer Award, he has won a 2008-9 Fulbright Grant to Sweden, the Aldworth Philharmonic Orchestra Young Composer’s Award, the 2007 VocalEssence Essentially Choral Award, and the 2006 Chanticleer Student Composer Award. His chamber opera is scheduled for an upcoming performance at the Swedish Royal Opera College in Stockholm, and recent performances have occurred in North Dakota, Minneapolis, Indiana, California, England and Sweden. His BMI award-winning work was commissioned and premiered by the St. Olaf Band, conducted by Timothy Mahr. Composer’s website: http://www.matthew-peterson.com

Subaram Raman was born in Absecon, New Jersey in 1986. He received a B.A. in music composition and music education from the University of California Los Angeles in 2007 and a M.M degree in composition from the University of Michigan in 2010. His composition teachers include Bright Sheng, Michael Daugherty, Paul Chihara and Roger Bourland. He performs on alto saxophone, oboe and English horn, and studied saxophone with Douglas Masek. Raman won the UCLA Percussion Ensemble Competition, the University of Colorado Flatirons Wind Ensemble Competition, the Isabel Bagramian Award from the Wallenberg Endowment for his international community service, the Presser Foundation Music Award for international research, and the Christine Rinaldo Memorial Scholarship from the University of Michigan. In addition to composing, Raman has worked as a music teacher in inner city Los Angeles as well as refugee camps in the Middle East. His latest project involves collecting and orchestrating folk songs from the Levant, in collaboration with local musicians. His BMI award-winning work was performed at the University of Michigan with future performances also planned. Composer’s website: http://subyraman.com

Derrick Wang was born in Baltimore, Maryland in 1984 and currently lives in New York City. He received a M.M. degree in composition from Yale University in 2008, a AB Music Magna cum laude, Phi Beta Kappa, with Language Citation in Chinese from Harvard University in 2006, and an Advanced Certificate in Piano from Peabody Preparatory in 2001. His composition teachers have included Bruno Amato, Julian Anderson, Joshua Fineberg, Elliott Gyger, Aaron Jay Kernis, Ezra Laderman and Ingram Marshall. He is the winner of the American Modern Ensemble Composition Competition, Yale’s John Day Jackson Prize, Harvard’s John W. Green Music Scholarship, Hugh F. MacColl Prize and Bach Society Orchestra Composition Competition. The American Lyric Theater plans a reading of his opera and recent performances include concerts by the Yale Philharmonia, the American Modern Ensemble, New Music New Haven, and concerts at Joe’s Pub and the Ars Nova Theater in New York City. His BMI award-winning work was premiered by the Harvard-Radcliffe Contemporary Music Ensemble and was performed in New York in 2008 at the A.N.T. Fest. Composer’s website:www.derrickwang.com

Nina Young was born in 1984 in Nyack, New York. She attended the Massachusetts Institute of Technology and received a B.S. in music and a B. S. in ocean engineering in 2007. In 2007-8 she served as a Research Assistant at MIT Media Lab, working with Tod Machover and she is currently pursuing a M. M. degree in composition from McGill University. She has studied composition with Sean Ferguson, Keeril Makan, Peter Child and Brian Robinson. Her long list of honors includes the 2010-11 Composer-in-Residence with the McGill University Contemporary Music Ensemble, P&B Shapiro Fellowship in Music Theory, a 2009 McGill Principal’s Graduate Fellowship, the 2008 Marvin Duchow memorial Scholarship, a European American Musical Alliance Scholarship for studies in France, and dozens of others. Young’s music has been performed in numerous occasions in Montréal, Boston, and in Paris. Her BMI award-winning work was premiered in March, 2010 at McGill University by pianist Yuxi Qin and Wensi Yan. Composer’s website: www.ninacyoung.com