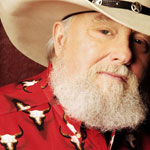 Charlie Daniels was honored as a BMI Icon during ceremonies at the 53rd Annual BMI Country Awards, staged October 18 on Music Row. Del Bryant, President & CEO of the performing rights organization, presented Daniels with an engraved silver champagne vessel with the inscription: "In recognition of your unique and indelible influence on generations of music makers."

In naming Charlie Daniels as a BMI Icon, the organization recognizes a record of accomplishment as substantial as it is difficult to describe.

A fiddler and guitarist, singer, songwriter and bandleader, he has left an indelible mark on American popular music not by virtue of radio hits, multi-platinum albums and industry awards -- though he has had them all -- but because of his lifelong pursuit of an artistic vision that has been both boldly innovative and respectful of tradition. From that vision, a body of music has emerged that gives compelling expression to a set of attitudes -- defiant, reverent, passionate, rebellious, patriotic, questioning, self-assured and, above all, independent -- deeply embedded in American culture, and especially in his native South.

From the blend of folk, bluegrass, country and rock he helped to pioneer as a Nashville session player through the innovative marriage of southern rock with country music that earned him lasting fame to the joyous bluegrass gospel of his latest album, Charlie Daniels has created an enduring legacy that has influenced generations of musicians and delighted millions of fans.

Born in Wilmington, North Carolina in 1936, Charlie Daniels began playing bluegrass in his teens, learning guitar, mandolin and fiddle. By the time he was in his 20s, he was making a living playing at honkytonks and rock & roll clubs, at first across the South and then around the country. Moving to Nashville in the late 1960s with the encouragement of his friend and co-writer, Bob Johnston of Columbia Records, he quickly established himself as a session player and sideman, recording and performing with an array of artists ranging from Bob Dylan to Marty Robbins, and Leonard Cohen to Earl Scruggs (Daniels can be seen appearing with Scruggs at a Washington DC peace rally in the 1970 public TV documentary, Earl Scruggs: His Family And Friends ).

Daniels released his first, self-titled album in 1970, then formed the Charlie Daniels Band, issuing the group's debut, Te John, Grease and Wolfman , in 1972. Fusing the bandleader's gruff drawl, instrumental chops and defiantly cross-cultural stance with the raucous energy of rock & roll, the CDB scored its first hit in 1973 with "Uneasy Rider," then followed it with "Long Haired Country Boy" and "The South's Gonna Do It Again," which earned Daniels his first BMI Country Award in 1976. Later that year, he broke into the country top 40 for the first time with "Wichita Jail," which won him the second of his six BMI Country Awards.

In 1979, Daniels drew on folk sources for a story and bluegrass and pounding southern rock for music to create his signature smash hit, "The Devil Went Down to Georgia," which scored on both the country (#1) and pop (#3) charts and earned him BMI awards in both fields, a Grammy for Best Country Vocal Performance by a Duo or Group, and the Country Music Association's Single of the Year and Instrumentalist of the Year honors, as well as an Instrumental Group of the Year title for the CDB. Featured in the popular movie Urban Cowboy , "The Devil Went Down to Georgia" propelled Million Mile Reflections , the CDB album from which it came (the title paid tribute to the group's indefatigable touring) to eventual triple-platinum sales and anchored the quadruple-platinum A Decade of Hits collection.

In the quarter of a century that has passed since then, Charlie Daniels has held onto the attributes that permeate his early work, at once becoming a larger-than-life legend and yet remaining a down-to-earth man who calls them as he sees them, as he did when he helped to inaugurate the Farm Aid concerts in 1985. Always a self-reliant artist who oversaw the production of his own albums, he launched his Blue Hat Records in 1997. Counter-cultural anthems like "Uneasy Rider" are still in his set list, joined by pointed discourses like "In America" and "This Ain't No Rag, It's a Flag," while his gospel recordings earned him Dove awards in 1995 and 1997.

Tearing up the roads at a pace that would exhaust many younger artists, Daniels' audiences range from those for whom "The Devil Went Down to Georgia" was part of a youthful soundtrack to youngsters not even born when it was a hit. A genial presence on the country music scene who nevertheless speaks his mind with precision and passion, he has recorded with Ricky Skaggs, Earl Scruggs, Travis Tritt, Garth Brooks and also Montgomery Gentry where his appearance on their 2000 single, "All Night Long," helped take it into the country Top 40.