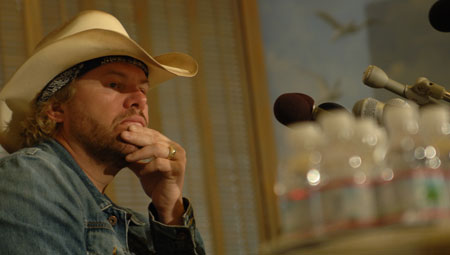 Prior to the reception, Toby answered a flood of questions from the press

For Toby Keith, 2006 was a very good year. He claimed his third BMI Songwriter of the Year crown, while his hit “As Good As I Once Was” scored a BMI Song of the Year win and spun its way to BDS Nielson’s most-played country song of the year. Fueled by all the spins, Toby’s 2006 release White Trash with Money became his 12th platinum album. In September of ‘06, Toby made his feature film debut in Broken Bridges. The film’s soundtrack made the highest country soundtrack debut in the history of SoundScan. Toby is currently climbing the charts with “High Maintenance Woman,” the fastest-rising single of his career. It’s the first release off his new album, Big Dog Daddy, which hits stores June 12, 2007. 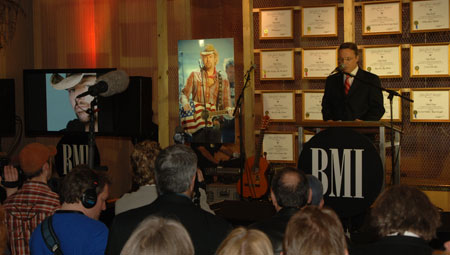 With over 30 million albums sold, Keith has remained BDS Nielson’s most-played country artist every year since 2003. He is a musical phenomenon, star of the silver screen and an entrepreneur, but he is also a rebel, a humanitarian and a pioneer. A BMI affiliate since 1991, Toby Keith is first and foremost a songwriter, boasting 23 BMI Country Awards in addition to his three BMI Songwriter of the Year titles. 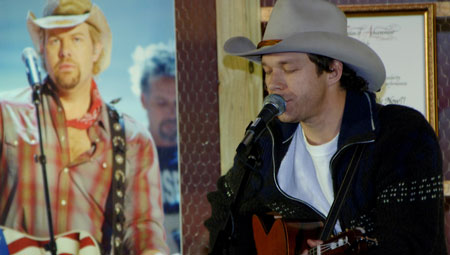 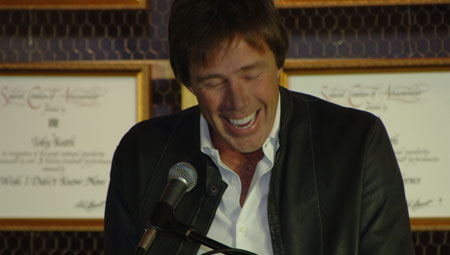 Toby Keith’s manager T.K. Kimbrell cracked both himself and the audience up during his entertaining and heartfelt speech

Toby and Harold Shedd shared a laugh. Shedd signed the then unknown Oklahoma native to his first record deal 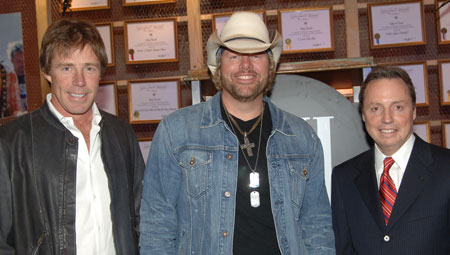 “I would trade every award I have - I’d give ‘em all away - for all my BMI Awards,” Toby said. “BMI is the one show that I’ve never missed. I always come and I always support it. The integrity of the award is so much higher than any of the awards that you would get.” Pictured are (l to r): longtime manager T.K. Kimbrell, Toby Keith and BMI’s Jody Williams
SOURCENews TAGS Country Scotty Emerick Toby Keith