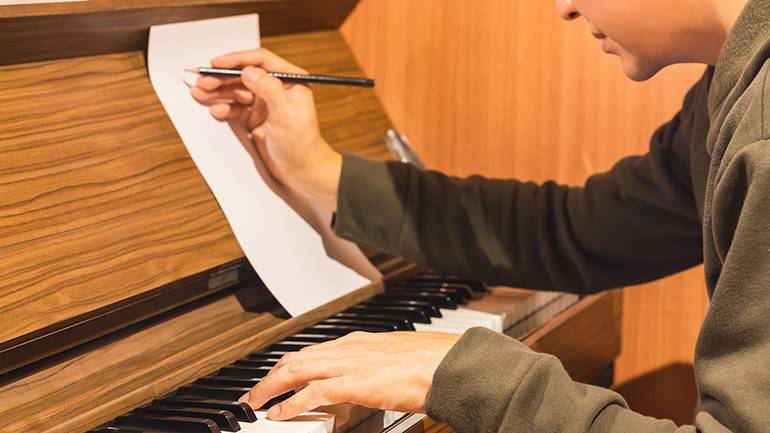 Few listeners would be able tell you where rhymes most often occur in songs. But after a lifetime of listening, they can sense something is wrong when the rhymes are not in the expected places. While there are no rules in songwriting, most popular songs incorporate rhymes in specific places. Let’s start with a refresher of rhyme schemes — the places rhymes are most commonly heard in popular songs.

In a 4-line section, the most common lines to rhyme are lines 2 & 4. For example:

Some songs rhyme lines 1 and 3 and 2 and 4. I want to write a song
And write it from my heart
I’ll make it really strong
And be on every chart

The other commonly heard rhyme scheme within a 4-line section rhymes lines 1 with 2 and 3 with 4. For example:

If you have an 8-line section, include rhymes in the first four lines and the second four lines as in one of the ways shown above. It will sound best to use the same rhyme scheme in both of the four-line sections.

Internal rhymes—rhyming words embedded within lines—are bonuses. They do not take the place of rhyming at the end of the lines. Here is an example of an internal rhyme: I see you and into my eyes

In a 6-line section, you can approach the first four lines as a 4-line segment, and use one of the options described above. Then also rhyme line 5 with 6. For example:

Artists writing for themselves have more latitude to use alternate rhyme schemes or no rhymes at all. This is most often heard in alternative rock songs. However, many alternative artists and self-contained pop, country, and R&B/hip-hop artists write songs with rhymes in the places outlined above.

Now that you know where rhymes are expected, let’s look at some of the most common pitfalls.

Avoid choosing the same vowel sound to rhyme in more than one section. For example, if you have an 8-line verse, rhyme different sounds in the first four lines and the subsequent four lines. Similarly, it is best to vary the rhyming vowel sounds between verses and choruses. For example, if your verse rhymes are “EE” sounds, stay away from “EE” rhymes in the chorus. By incorporating different vowel sounds we have more rhyming words to choose from and less chance of our rhymes sounding trite and forced.

Conveying meaning and emotion in our lyrics is far more important than having perfect rhymes. It is preferable to use a near rhyme that sounds natural and advances the meaning of your lyric instead of settling for lines that sound like they were only written to satisfy the need for a rhyme.

Near rhymes—also known as slant rhymes—are pairs of words that are close to being rhymes—but not quite. They can be heard in countless successful songs. Examples of near rhymes include pairing “all” with “soul” and “home” and “stone.”

3. Using Words That Have Few Rhymes

Stay away from writing lines that end with words that are difficult or impossible to rhyme. For example, avoid setting up a rhyme scheme that relies on the “of” sound found in love. This can lead to using cliches such as “… the sky above” and “… dreaming of.” Words such as orange, silver, purple, ninth, wolf, and dangerous have no exact rhymes.

When you feel boxed into a corner because you are unable to find a natural sounding rhyme, you can almost always rearrange the order of the words to end your line with a word that is easier to rhyme.

4. Not Maintaining a Consistent Rhyme Scheme

It is fine to have a different rhyme scheme in your verses than your choruses and bridge, if applicable. But it is best to keep the same rhyme scheme in all verses. For example, if your first verse rhymes lines 2 and 4, it will sound best to rhyme lines 2 and 4 in subsequent verses.

5. Using Words That Appear to Rhyme—But Do Not

When read silently, some pairs of words appear as if they share the same vowel sound. But when spoken or sung outloud they fail to deliver a rhyme. For example, “seen” and “been”; “near” and “bear”; and “rain and again.” Be sure the words you rhyme really do rhyme.

In conclusion, to satisfy your listeners and give your songs their best shot at success be sure to include rhymes in the expected places and steer clear of the pitfalls described above.

Jason Blume is the author of 6 Steps to Songwriting Success, This Business of Songwriting, and Inside Songwriting (Billboard Books). His songs are on Grammy-nominated albums and have sold more than 50,000,000 copies. He has been a guest lecturer at the Liverpool Institute for Performing Arts (co-founded by Sir Paul McCartney) and at the Berklee School of Music, and has been interviewed as a songwriting expert for CNN, NPR, the BBC, Rolling Stone and the New York Times. For information about his workshops, webinars, additional articles, and more, visit www.jasonblume.com.