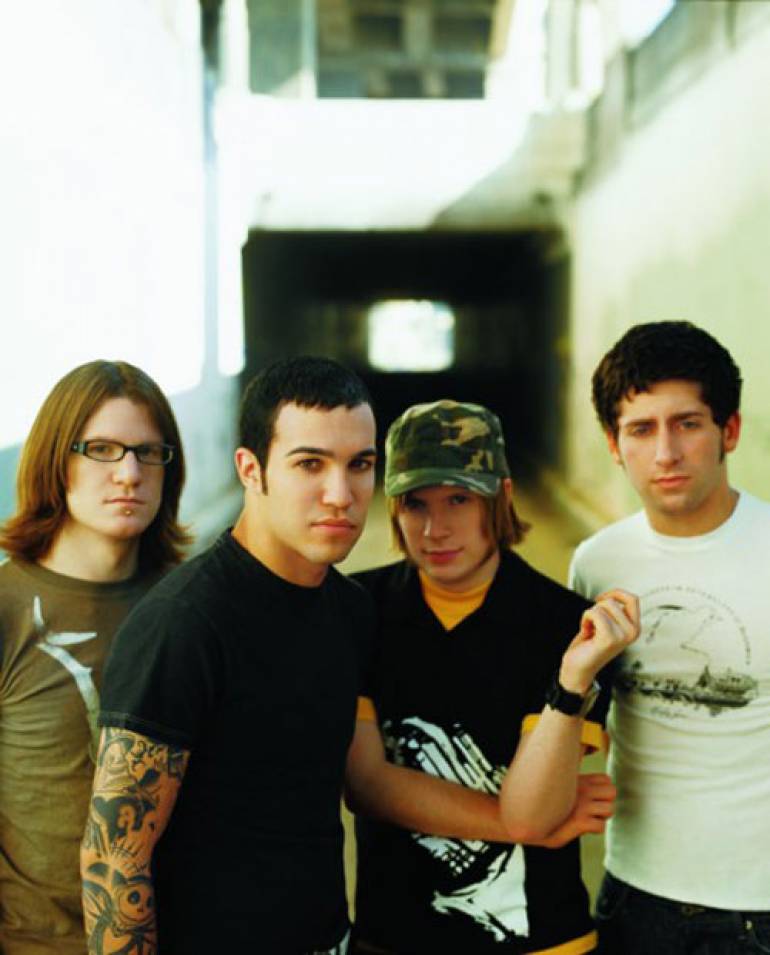 On May 3rd, Island recording group Fall Out Boy - named one of the “10 Artists To Watch” by Rolling Stone - released its hotly anticipated major label debut, From Under The Cork Tree. Already tipped off as one of the “Most Anticipated Releases of 2005” by Alternative Press in its annual “Most Anticipated” issue (January) and chosen by MTV as one of the bands to watch in 2005, From Under The Cork Tree is now the #1 Tower online pre-sale title of all time, beating Depeche Mode, A Perfect Circle, Train and more.  The cd was produced by Neal Avron (New Found Glory,  Everclear, Yellowcard). The first single is “Sugar, We’re Goin’ Down.”

From Under The Cork Tree comes out during Fall Out Boy’s sold–out headline tour with Gym Class Heroes and The Academy Is…  The 7-week, 38-city marathon cross-country tour schedule also featured Midtown and Silverstein on select dates.  Following their U.S. headline tour and album release, Fall Out Boy will be joining the punk rock elite on the main stage of the 2005 Vans Warped Tour.  In addition, Fall Out Boy will make their national television debut on Late Nigh With Conan O’Brien (NBC) on May 10th.

The upcoming release follows the band’s 2003’s cd Take This To Your Grave released on Fueled By Ramen.  The album has sold over 200,000 copies to date and yielded back-to-back #1’s on FUSE’s Ovenfresh, “Dead On Arrival” and “Grand Theft Autumn/Where Is Your Boy.”

Meanwhile, Take This To Your Grave has become an industry phenom over the past two years, holding the #1 spot on the influential Alternative Press Reader’s Chart for months.  The magazine went on to vote Fall Out Boy the #2 most under-rated band of 2003, and one of “100 Bands You Need To Know For 2004,” before putting them on the cover of last August’s issue.

Fall Out Boy has taken their “thoughtful, andrenalized punk rock…” Rolling Stone on the road logging over 550 tour dates in two years.  The band has established an incredibly dedicated fan base touring with top acts such as Taking Back Sunday, Blink 182, Yellowcard, Less Than Jake and many others. In addition, their impressive sales figures and press buzz will help catapult Fall Out Boy to the next level with From Under The Cork Tree.  States the New York Daily News, “This Boy is voted most likely to succeed.”

“From Under The Cork Tree” is in stores now on Island Records.