Posted in MusicWorld on December 21, 2009 by Bruce Britt 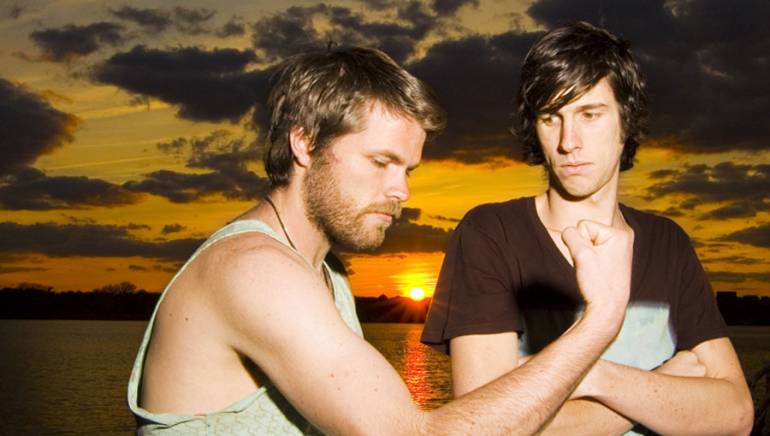 According to 3Oh!3 rapper/beatmaster Nathaniel Motte, the whole “music thing” started out as just a hobby. About four years ago, Motte met Sean Foreman in a physics class at the University of Colorado. Discovering shared tastes in music, the duo began composing original tracks, honing a bawdy live act that they performed in Boulder-area clubs.

Today, the so-called “music thing” has exploded into a much-buzzed about pop franchise. Naming themselves after the Boulder area code, 3Oh!3 are riding high atop the platinum success of their single, “Don’t Trust Me.” The group recently spent their second consecutive summer performing on the world-renowned Warped Tour, recorded a track with rap superstar Lil Jon, and laid down a remix of the single “Starstrukk” with guest vocals by Katy Perry.

“That’s not to say that we don’t work super, super hard to get where we are, but it is really amazing that we have sold over a few million singles,” Motte says. “We just found out today that we were nominated for Best New Artist at the VMAs. Things like that … every day’s an amazing day.”

3Oh!3’s cascade of good fortune has been fueled by the group’s sophomore album, Want, a tongue-in-cheek amalgam of Eminem-styled rap, emo vocals and sputtering electroclash arrangements. Much like the Beastie Boys’ Licensed to Ill captured the spirit of the mid-to-late ’80s, Want taps into the late 2000s zeitgeist with its bratty attitude and colloquial lyricism.

For Motte, 3Oh3’s success also represents a vocational detour. Just as 3Oh!3’s career was taking off, Motte got accepted to the University of Colorado School of Medicine. Currently on student deferment, his next move is pretty simple: “I’m going to see if I can’t delay the deferment just a little bit more,” he says with a laugh.