Posted in MusicWorld on July 24, 2008 by Dana Rodriguez 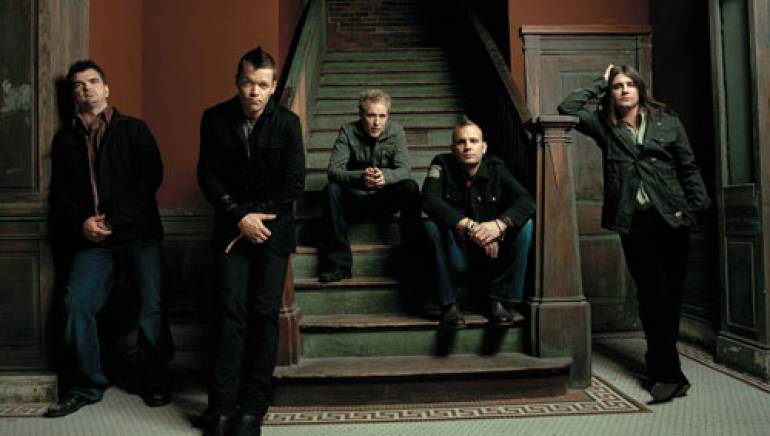 If you look in the dictionary under “American rock band,” you will see a photo of 3 Doors Down.

The quintessential pop-rockers who have sold millions of albums worldwide — 13 million to be exact — have earned that distinction by consistently producing music with a signature blend of catchy riffs, hard-edged soul and gripping lyrics.

It’s the same formula that resulted in their breakthrough hit “Kryptonite” and that has once again propelled 3DD into the No. 1 chart spot with their first self-titled major-label release, the group’s fourth studio album and what some consider their “most definitive.”

“What it took was for us to take some real time off, go home, and then gather again as the band we know how to be,” says lead singer/songwriter Brad Arnold. “It was so appropriate to self-title the album because, after taking what amounted to almost a year-long break, we were hungry for each other’s company.”

So hungry, the band rented an old farmhouse south of Franklin, Tennessee, where they would not only write songs, but also live together for a while. “The farmhouse was great because it became a wholehearted experience where we just focused on the writing,” adds Arnold. “It was such a close-knit atmosphere, reconnecting us after we had been doing our own thing for a while. It set a cool mood for the entire record, writing out in the country around this fireplace in the basement. Just locking ourselves away and doing it.”

But then it got too cold, so the fivesome headed to Orlando to finish recording 3 Doors Down. The result: radio gems like the CD’s first single, “It’s Not My Time,” the contemplative “Pages” and “Citizen/Soldier,” a tribute to the National Guard that’s been used on recruitment ads.

Hailing from the small town of Escatawpa, Missisissippi, 3 Doors Down formed in 1995 as a trio consisting of vocalist and then-drummer Brad Arnold, guitarist Matt Roberts and bassist Todd Harrell. To beef up their sound, rhythm guitarist (and childhood friend) Chris Henderson came on board just before they landed a recording deal on Universal Republic. Ex-Puddle of Mudd drummer Greg Upchurch joined the lineup in 2005.

In 2000, they released their six-times platinum debut, The Better Life, which, in addition to “Kryptonite,” included the mega-hits “Loser,” “Duck and Run” and “Be Like That.” All four songs dominated the Billboard charts for more than a year, earning Arnold the Pop Songwriter of the Year crown at the 50th Annual BMI Pop Awards ceremony.

Their 2002 follow-up, Away From The Sun, sold an impressive four million copies and produced such chart-toppers as “When I’m Gone” and “Here Without You,” BMI’s 2004 Pop Song of the Year.

In between, they issued the live EP Another 700 Miles, returning to the studio with 2005’s Seventeen Days, which, like 3 Doors Down, also debuted at No. 1 on the Billboard 200 chart. Seventeen went platinum in its first week of release on the strength of radio smash “Let Me Go.”

While demanding fans have kept these tireless road warriors on the stage playing more than 200 shows per year, the group’s members still devote time to their homegrown organization, The Better Life Foundation, which has raised more than $2 million for local children’s charities since its inception in 2003, proof that these Mississippi boys have never lost their small-town identity.

With 3 Doors Down already destined to be the group’s masterwork, the quintet also offers proof that hard work and making plain ol’ good music really do pay off.

“This truly is our defining moment as musicians,” drummer Greg Upchurch concludes. “The writing, the recording, the level of collaboration was truly an all-around band effort. This CD is living proof of how good this band can be.”