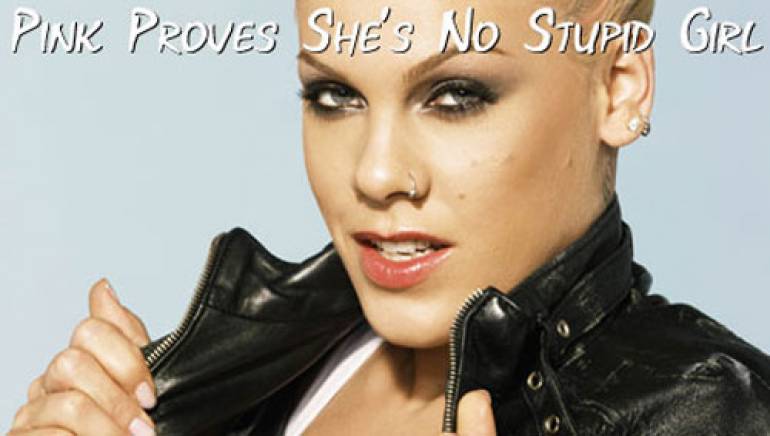 Over the course of her brief but brilliant career, Pink has consistently reconciled flirty sexuality and soul-searching introspection. Composing and performing songs that run the gamut from dance hits ("Get This Party Started") to pop-soul ballads ("Family Portrait," "Just Like A Pill"), the Grammy-winning diva has set the standard for a savvy new brand of female pop celebrity.

So it comes as no surprise that Pink's new album, I'm Not Dead, laments the toll western culture is taking on her and the world. On the single "Stupid Girls," the singer weighs in on the current state of young womanhood, serving up caustic lyrics about girls who, "travel in packs of two or three/with their itsy-bitsy doggies and their teeny-weeny tees . . .

"What happened to the dreams of a girl president?," Pink croons righteously, "she's dancing in the video next to 50 Cent . . .where, oh where, have the smart people gone?"

With its timely lyrics, "Stupid Girls" seems certain to click with fans who relate to Pink's struggle to remain genuine in an increasingly narcissistic world. "In my opinion, there is absolutely nothing wrong with being sexy, feeling sexy, or dressing sexy," the singer writes on her website (www.pinkspage.com). "My point is only this — that 'SMART' and 'SEXY' are not oil and water. You don't need to dumb yourself down in order to be cute. You also don't have to have the latest $10,000 handbag to be cool."

"Stupid Girls" is one of the many highlights featured on I'm Not Dead, an album Blender magazine enthusiastically described as "supercharged." Like its predecessors Can't Take Me Home (2000), Missundaztood (2001) and Try This (2003), the new disc offers a revealing glimpse inside the psyche of a true pop iconoclast, as evidenced by songs like "I Got Money Now," "Conversations With My 13 Year-Old Self," and the scathingly political "Dear Mr. President."

I'm Not Dead takes its esteemed place alongside Pink's previous albums, all certified platinum, yielding the hit singles "There You Go," "Most Girls" and "Don't Let Me Get Me," among others. In spring 2001, Pink joined forces with dance-pop wunderkind Christina Aguilera, rapper Lil' Kim and r&b singer Mya for a remake of the 1975 LaBelle hit, "Lady Marmalade." Co-produced by Missy Elliott and Rockwilder, the song rocketed to the top of Billboard's Hot 100 chart, captured a Grammy and resulted in a tremendously popular video.

Pink made headlines recently when she married motocross/reality TV star Carey Hart. Fans can see her in Catacombs, the 2006 horror flick from the makers of the box-office smash, Saw.

With a blossoming professional career and a fairy-tale personal life, Pink seems to have it all. But the endearingly self-deprecating singer says appearances can be deceiving.

"To a certain extent I am proud of myself for keeping hold of my integrity and taking risks and not completely conforming," she writes on her website. "On the other hand, I am my own worst enemy, my own worst critic, and I am extremely hard on myself."