Posted in MusicWorld on July 25, 2004 by Charlene Blevins 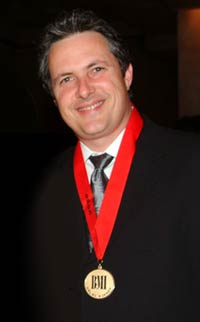 Texan Jim Collins came to Nashville in 1995, like so many others, looking for a record deal. He and his wife had made an agreement, though: He’d give it one year. He jokes that his wife is still mad, since it took him a year and two days to land a deal with Arista.

Tellingly, though, it took him a mere three months to get a publishing deal.

He’d been writing songs and having them become his most requested material while playing the Texas dancehall circuit, but he thought it was because they were just “different.”

But when searching for songs for his debut album, he wasn’t satisfied. “All the songs I was being pitched had been passed on by…everybody important!” he says with a laugh. “So I started writing to see if I could beat what I was being pitched. When I took them to the label, maybe they thought it was too aggressive or wasn’t the direction they saw me going in, so I’d let the songs go, and I started having hits with other artists.”

The first was with John Michael Montgomery, “Love Working On You,” and another with Ty Herndon, “Hands Of a Working Man,” soon followed. The record deal dematerialized about this time, so Collins made an astute observation: “Maybe I was meant to do something else.”

Indeed he was. He’s had 50 cuts to date — six top 10s and two of those multi-week #1's (“Yes,” four weeks for Chad Brock, and “The Good Stuff,” with Kenny Chesney — a seven-week #1 and Billboard and ACM Song of the Year). He also penned another big hit for Chesney, “She Thinks My Tractor’s Sexy,” and the recent Trace Adkins top 10 “Then They Do.”

With all that success, four BMI Million-Air awards to date, and nine new cuts in the first two months of 2004 with artists as varied as Tim McGraw, Trick Pony and Keith Urban, we wondered if he had any advice for other writers. “Yeah,” he says slyly with that unmistakable jest in his voice. “Stop writing. Everybody else just chill out for a while,” he chuckles. “I’ll handle it from here.”