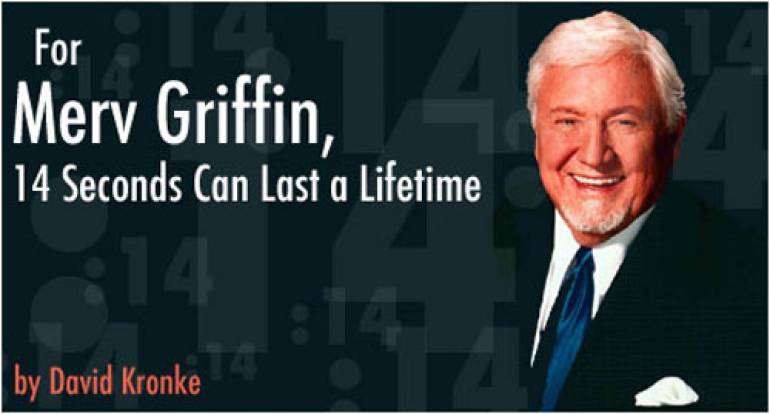 For Merv Griffin, receiving BMI's President's Award at its annual Film and Television Awards ceremony May 14 in Los Angeles has caught him by surprise. The award puts him the company of such musical legends as Willie Nelson, Pete Townshend, Harlan Howard, Earle Hagen, Brian Wilson and Alabama. "It must be the strangest award they've ever given — I'm a guy who wrote a 14-second song and then turned around and did it in another key," he notes.

Of course, a mere glimpse at Griffin's resume definitively demonstrates he has done exponentially more. But he has a point: In what he admits was a 30-minute session noodling around on his piano, Griffin created what has to be one of America's best-known melodies: the immortal theme to his game show, "Jeopardy!"

"That 'Jeopardy' theme is simply amazing," Griffin does allow. "I've written the shortest, most recognizable song. There was a list compiling the shortest songs: 'Happy Birthday to You' is 17 seconds. 'Jeopardy' is 14 seconds. So I rewrote it in another key, then added the 'bum-bump' to get it to 30 seconds, which was the amount of time contestants needed to write the question to the Final Jeopardy answer. Now, it's played at sporting events; I've played it with the Boston Pops in a huge arrangement. It's one of the most lucrative themes in history."

Griffin acknowledges that "the music brought fame to the show," whereas another theme he wrote for another of his game shows, "Wheel of Fortune," endures due to the simple genius of the game. "[Fewer] people recognize that theme, but it just sounds right," Griffin says. "I visualized that wheel going around and around when writing it. They've performed it a number of ways — 10 years ago, they did it with a big band; that was a great arrangement. Today, it's a kind of nondescript rock & roll arrangement that's more annoying than anything else."

Music kicked off Griffin's storied career, of course, with performances on San Francisco radio and tours with Freddy Martin and His Orchestra. His first hit came in 1950, with "I've Got a Lovely Bunch of Coconuts." Fifty years later, he returned to the studio to work on another album, It's Like a Dream, boasting a title song written by Griffin.

" After 25 years of not singing, wondered if I could do it again," Griffin explains of the latest album, which was successful enough for him to consider returning to the studio.

Griffin was hardly idle when not singing. He hosted Emmy-winning late-night and afternoon talk shows — "When I went off in 1986, I was down to listening to soap opera stars solve the world's problems, which was driving me nuts," he cracks — and enjoyed entrepreneurial successes with his TV-production company and hotel chain.

The secret to career longevity, Griffin confides, is simple: "Never let audiences know what's going to happen next. I felt that nothing was bad for the show." As an example, he recalls a time when a cow defecated in front of his late-night talk show's studio audience. "I said, 'Ohhh, it's my first bad review,' and went on with the show. You want people to realize that they need to keep watching because anything can happen."

Even winning a prestigious award for a 14-second tune.