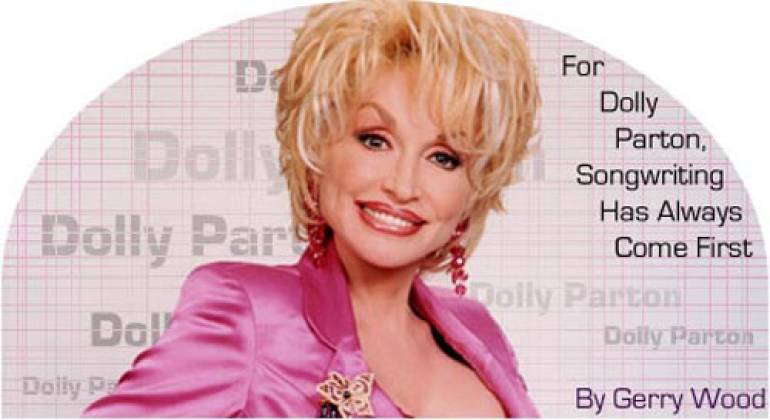 She's a sex symbol. An actress. A singer. But, ask Dolly Parton what she is and she'll say, "songwriter."

"This is the greatest honor I've ever received," Parton beamed, after her recent induction into the Songwriter's Hall of Fame. "I'm thrilled because I started out wanting to become a songwriter."

Just learning she would be receiving the tribute injected creative adrenaline. "I was in Los Angeles when I heard about it," she notes. "I immediately took off wandering into the San Bernardino Mountains and along the shoreline to get away from it all and jump back into songwriting. I got so inspired that I wrote 15 songs in a row!"

The brains-meets-beauty bombshell has won raves for her Oscar-nominated movie debut in 9 to 5, sparkling concerts, charitable activities and business ventures. Her Dollywood theme park, snuggled in the Smoky Mountains, has become Tennessee's major tourist attraction.

Parton's east Tennessee hills were alive with the sound of music when she was born on January 19, 1946. She sang in church when she was six and started playing guitar a year later. "What soul I have in my voice, the feeling and sincerity that's there, is from those church-singing days," Dolly says.

She headed for Nashville the day after high school graduation. Her first day in Music City was fateful: She met Carl Dean, and two years later they were married. In 1967, Porter Wagoner hired her for his syndicated TV show. The Dolly/Porter tandem landed a score of hits, earning the Country Music Association's vocal duo honors twice.

As a solo artist, she hit the country charts for the first time in 1967 with her single "Dumb Blonde." In the early '70s, she ruled the charts with such classics as "I Will Always Love You," a number one country hit in 1974. She cut it again in 1982 and the ballad repeated its climb to the zenith. Then, 10 years later, Whitney Houston released the most popular version yet, clinging to the top of the pop charts for 14 weeks and earning BMI's Most Performed Song of the Year accolades (the highlight of her collection of more than two dozen BMI Country and Pop Awards). Dolly's platinum-plated recording success gained her country music's loftiest plaudits, including CMA Entertainer of the Year and enshrinement in the Country Music Hall of Fame.

The bubbly, self-deprecating Parton continues to work non-stop. Two of her finest albums have been her latest. The Grass Is Blue captured a bluegrass Grammy while the folky Little Sparrow garnered more sparkling reviews.

Dolly has managed to stay personally and professionally centered with the two loves of her life: Carl Dean and songwriting.

"Carl is good for me because he's so different in nature from me," Dolly explains.

Parton's newest venture has her portraying the equally sassy and busty Mae West in a CBS-TV movie. "I figure I'm as brassy as she was," Dolly adds, with her tinkly, wind-chime laugh. "I'm writing a bunch of new music for it."

Then her eyes grow soft with distant mountain memories. "You know, I came from the hills into Nashville to make it as a songwriter. That's what got me started, and that's what keeps me going. I've always considered myself as a songwriter first."