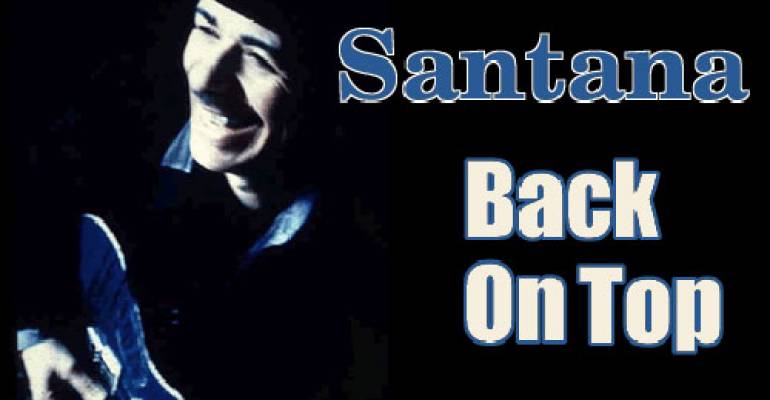 Santana’s Grammy triumph is just the latest installment in a career flush with achievement. Over the course of his 30 year career, Santana has worn of variety of musical caps - seminal latin rocker, legendary guitarist, fusion jazz pioneer and AOR rock virtuoso among them. But lately, the 52 year-old Rock n’ Roll Hall of Fame inductee has donned his most colorful hat yet - that of a pop music elder statesman. Indeed, pundits will surely glean cosmic lessons from Santana’s Grammy sweep. By beating out teen nominees like Backstreet Boys and Britney Spears, the guitarist has dramatically underscored the ancient belief that age and wisdom come before youth.

The story behind Santana’s comeback is more curious than fiction. Touted as Santana’s first studio album in seven years, “Supernatural” was released in 1999 to effusive reviews. Much to everyone’s surprise, the disc rocketed to the top of the pop charts, selling over five million copies by the end of 1999. When Grammy nominations were announced in January, “Supernatural” had captured 10 bids, making Santana the odds-on favorite at this year’s gala, which was produced by the National Academy of Recording Arts and Sciences.

Nabbing 10 Grammy nominations is an impressive feat for any artist, but Santana’s success is even more surprising considering the maturity of his music. Indeed, “Supernatural” is that rare recording that effortlessly bridges the generation gap. The disc’s appeal was enhanced by its many cameo performances. The disc spawned a salsafied hit single titled “Smooth” featuring passionate vocals courtesy of Matchbox 20 singer, Rob Thomas.

“Supernatural” has cemented Santana’s reputation as rock’s most canny multiculturalist. Indeed, as he enters his third decade in the spotlight, Santana’s influence looms larger than ever. His visionary mix of Afro-Cuban rhythms and volcanic rock paved the way for the current Rock En Espanol movement, as well as the international latin pop craze. But Santana’s lordly status isn’t based on talent alone. As his extensive record catalog attests, Carlos Santana is a truth seeker guided by a higher musical power. Indeed, the guitarist is one of few rock musicians to which the term “spiritual” could be convincingly applied.

Given his spiritual inclinations, it’s not surprising that Santana described “Supernatural” in divine terms. “You can really feel God’s hand in this,” the guitarist says. “Usually, when you do a CD with so many incredibly talented people, there’s no glue, there’s no cohesiveness. But on ‘Supernatural,’ everyone involved from the musicians to the engineers understood the intentions, motives and purpose of making this CD. We all hit the bullseye.”

Born in Mexico in 1947, Santana was initially influenced by his father, a mariachi musician. His family’s relocation to San Francisco marked the beginning of Santana’s bluesy latin-rock explorations. Forming a band under his name, Santana gained international exposure with his breakthrough performance at the 1969 Woodstock festival. Later that same year, the guitarist launched his recording career with a self-titled album. Subsequent recordings like “Abraxas,” “Santana III,” and “Caravanserei” were tremendously influential.

While Santana’s latest album has been hailed as a conceptual masterwork, it isn’t the guitarist’s first collaborative effort. An insistent experimenter, Santana has the performed with a diverse range of musicians including jazz legend Herbie Hancock, Wayne Shorter and Ron Carter, country icon Willie Nelson, and r&b stalwarts like Booker T Jones and the Fabulous Thunderbirds.

Ever the sage, Santana is philosophical about his latest recording. With its multi-ethnic cast of performers, “Supernatural” gives fresh meaning to the term “racial harmony.” As the rock ‘n’ roll elder statesman himself says: “Everybody gets wet when it rains, from the prostitutes to the pope. My music strives to communicate that message of unity.”