Posted in MusicWorld on April 30, 2000 by Jeff Samuels 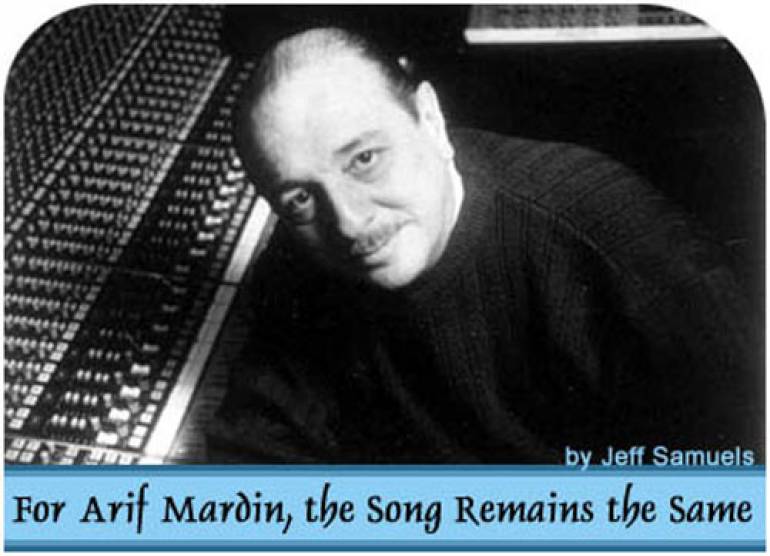 Respect, to quote Aretha Franklin, one of the many superstars whose music has been graced by Arif Mardin's presence, is the legendary producer's main criteria in selecting a project. "I don't work with an artist if I don't respect the artist," he says. "Respect for the artist's genius is vital to me in making excellent music. I love good music that is honest, regardless of the genre," which explains why Mardin has been at the top of his game since the early 1960s. The song is also of vital importance to a Mardin project. "While technology has dramatically changed the way we now record," he notes, "the song remains the same. Things go forward, but a great song is a great song."

Born and raised in Istanbul, Turkey, Mardin, a lover of American jazz, first came to the United States in 1958 after meeting jazz giants Dizzy Gillespie and Quincy Jones. He studied at the prestigious Berklee School of Music on a Quincy Jones scholarship, where he received a three-week BMI scholarship for a special music seminar with jazzmen Max Roach, John Lewis and Lee Konitz. Shortly after graduation in 1963, Mardin joined Atlantic Records as an assistant to the label's co-chairman, the late Nesuhi Ertegun. His talent was immediately recognized and he was soon named the label's house producer and arranger. In 1969 he was named a Vice President of the company, and now serves as a Senior Vice President.

Mardin is also active in producing music for movies and television. He served as the musical director for the Warner Bros. film Why Do Fools Fall In Love, about Frankie Lymon; produced tracks for the ABC television movies Double Platinum and Cinderella and contributed to the soundtrack for the recent South Park movie. The multi-talented Mardin found time two years ago to write a one act opera that premiered in New York.

Long-time friend and collaborator Ahmet Ertegun, Atlantic Records Co-Chairman/CEO, in speaking of Mardin said, "In a business often driven by trend and fashion, Arif has remained a true artist, a man of incredible musical talent. In contrast to many other producers, Arif does not have one sound that dominates his records. Rather he creates an environment unique to each performer, the common link being exceptional quality and taste. As a result, for over three decades, he has helped singers and musicians of very different styles do the best work of their careers."

While his records speak for themselves, Mardin's numerous awards recognize his major contributions to the industry. He has earned more than 40 gold and platinum albums and has been recognized with over 15 Grammy nominations and six Grammy Awards. In 1990, he was inducted into the National Academy of Recording Arts and Sciences Hall of Fame.

Not one to rest on his laurels, Mardin is currently working on a project with vocalist Linda Elder, the star of Broadway's Jekyll and Hyde. Although he is now primarily recognized for his production work, Mardin first won notice for his arranging skills, which he has continued to exercise throughout his career. He opened the 21st century by writing orchestral arrangements for Eric Clapton's latest recording, featuring special guest B.B. King, and wrote string and horn charts for a forthcoming Gladys Knight record.