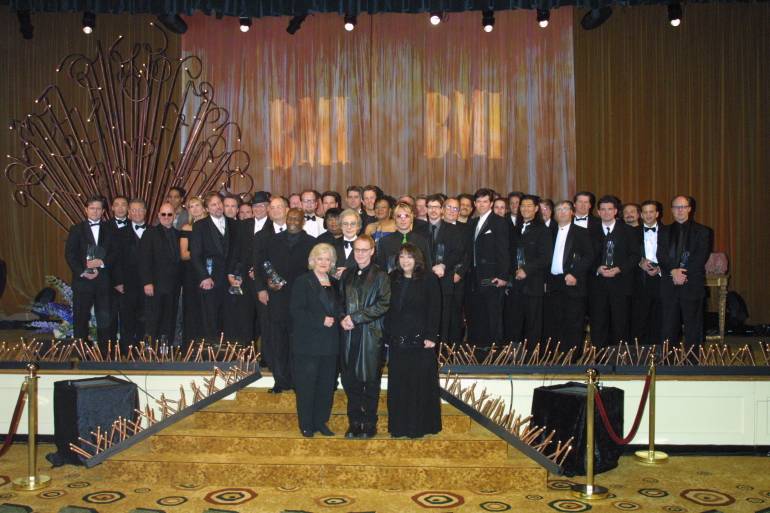 BMI honored the composers and songwriters of the music to the top-grossing films, the top-rated prime-time network television shows and the highest ranking cable television shows of the year at its annual Film & Television Awards dinner. Held at the Regent Beverly Wilshire Hotel in Beverly Hills on May 15, the black tie gala was hosted by BMI President and CEO Frances W. Preston. More than 65 awards were given out during the ceremonies by Preston and BMI Vice President of Film/TV Relations, Doreen Ringer Ross.

The highlight of the evening was the presentation of the BMI award for Outstanding Career Achievement to Spider-Man composer Danny Elfman. Named after past BMI Vice President Richard Kirk, the prestigious award is given annually to the composer who has made significant contributions to film and TV music. Past recipients of the award include John Barry, Charlie Fox, Jerry Goldsmith, Earle Hagen, Michael Kamen, Alan Menken, Thomas Newman, Mike Post, Lalo Schifrin, Richard and Robert Sherman, W.G. “Snuffy” Walden, John Williams and Patrick Williams.


A highly prolific and influential musician, Elfman carries dual notoriety - that as a highly respected and revered composer and as the lead singer of seminal Southern California rock band Oingo Boingo. Elfman entered the world of film music in 1985, when director Tim Burton and star Paul Reubens called him to write the music for Pee-Wee’s Big Adventure. In addition to Spider-Man and Pee-Wee, other scores include the upcoming Men In Black II (opens July 3), Men In Black, Planet of the Apes, Proof of Life, Spy Kids, Sleepy Hollow, Family Man, A Simple Plan, Good Will Hunting, Mars Attacks!, Mission: Impossible, Dead Presidents, To Die For, Dolores Claiborne, Black Beauty, The Nightmare Before Christmas, Edward Scissorhands, Batman, Batman Returns, Midnight Run, Scrooged, Beetlejuice, The Simpsons, Tales From The Crypt, Alfred Hitchcock Presents, Amazing Stories, as well as songs for such diverse films as Ghostbusters 2, Weird Science and Fast Times at Ridgemont High.

Elfman has also won a Grammy Award for Best Instrumental Composition for the theme to Batman, a Saturn Award for Best Score for The Nightmare Before Christmas, and has been twice nominated for an Academy Award.

At the dinner, Elfman was feted by many of the directors with whom he has worked. Burton, who spoke about having seen Elfman with Oingo Boingo in clubs in Southern California before ever meeting him, described him as "a real artist in the sense that he is like his music and his music is like him. From the very beginning it was always exciting for me to work with someone who was experiencing things new and coming at it from an interesting perspective. He brings that intuitive excitement to a project. He respects tradition without doing it exactly. He’s able to understand things people don’t understand on the surface and get underneath it, like a silent movie to where you’re part of the emotion of it without overstating it."

Calling Elfman’s music for Spider-Man “rousing and uplifting,” director Raimi said, “I feel like he always waits for the film and the audience to create a feeling together, and I think what Danny does is he gently carries the audience to that next place - but he allows them to do the work. He has the unique ability to create a soul to his music. He’s a genius, he really is, that ‘can’t’ word can’t be thrown about it, but when you listen to his music and the diversity of it and how successful it is with the images, I don’t know if there’s a better word to describe him.”

Also honored with BMI Film & Television Awards was composer John Williams, who received the most crystal statuettes during the presentation, with four for Harry Potter and the Sorcerer’s Stone, Jurassic Park III, A.I.: Artificial Intelligence and the 2002 Winter Olympic Games. Composer Mike Post led the way for Television Awards, receiving three for Law & Order, Law & Order: SVU and NYPD Blue. Composer David Newman received two awards for Ice Age and Dr. Dolittle II. A number of recording artists who are making a name for themselves in the worlds of film and TV music received awards including BT for The Fast and The Furious, Moby for the 2002 Winter Olympics, Paul Oakenfold for Swordfish, David Holmes for Oceans 11 and Bob and Mark Mothersbaugh for Rugrats.

Composer T-Bone Burnett received a special Certificate of Achievement for the five-time Grammy Award-winning O Brother, Where Art Thou soundtrack, as did the composers of the original music for the 2002 Winter Olympics, including the aforementioned Williams and Moby, as well as Kurt Bestor, Sam Cardon, David Foster, Michael Kamen and Linda Thompson.

This year also marked the first time BMI presented Cable Television Music Awards to the composers of the highest-ranking cable television shows of the year. Award recipients included Guy Moon for Chalkzone and Fairly Oddparents, Jim Johnston for WWF Monday Night RAW, Howlin’ Wolf for The Sopranos, Douglas Cuomo for Sex and the City, Michael Kamen for Band of Brothers and Thomas Newman for Six Feet Under.

BMI’s Emmy Award winning composers were also honored, including Patrick Williams for “A Dream That Only I Can Know” from Yesterday’s Children; Buckwheat Zydeco for Pistol Pete: The Life and Times of Pete Maravich; Brian Siewert for “Where There Is Hope” from Guiding Light; Lolita Ritmanis, Michael Mc Cuistion and Kristopher Carter for Batman Beyond; and Gary Kuo, Robert Sands and Dominic Messenger for As The World Turns.

High-resolution photos of the 2002 BMI Film & Television Awards will be available for downloading on the BMI Media Relations web site at press.bmi.com.


Below is the complete list of 2002 BMI Film/TV Awards winners:

BT
The Fast and the Furious

Danny Elfman
Planet of the Apes

Jerry Goldsmith
Along Came A Spider

Kurt Farquhar
The King of Queens

Josh Goldsmith
The King of Queens

Andrew Gross
The King of Queens

Cathy Yuspa
The King of Queens

Gary Kuo
As The World Turns

Robert Sands
As The World Turns

Dominic Messenger
As The World Turns

Brian Siewert
"Where There Is Hope" from Guiding Light

Douglas Cuomo
Sex and the City