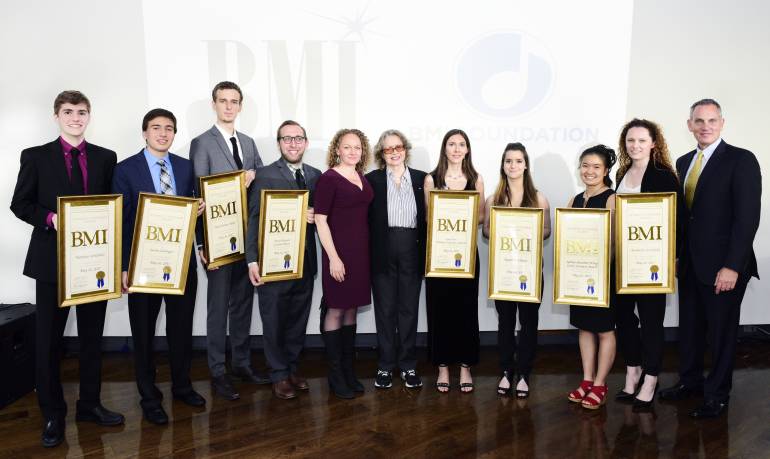 The BMI Foundation (BMIF), in collaboration with BMI, has announced the nine young classical composers, ages 14 to 28, who have been named winners of the 65th annual BMI Student Composer Awards. Renowned American composer and Chair of the Student Composer Awards Ellen Taaffe Zwilich, BMI President and CEO and BMIF Honorary Chair Mike O’Neill, and BMI Executive Director of Classical and BMIF President Deirdre Chadwick presented the awards at a private ceremony held on May 16, 2017, at Three Sixty° in New York City.

“All of us at BMI are so impressed with this year’s talented young composers, and we are honored to have a front row seat as they embark on this exciting journey towards a professional life in music,” said Deirdre Chadwick, Director of the Student Composer Awards. “I hope that this award will give them the confidence to continue pursuing their passion for creating music and sharing it with others.”

The celebratory evening featured a PUBLIQuartet performance of the 2016 SCA-winning composition “Miniatures for Two Violins,” composed by Justin Zeitlinger, who was the Carlos Surinach Prize winner that year.

This year’s preliminary panelists included Alexandra du Bois, Jeremy Gill, Shawn Jaeger and David Schober. The final judges were Steve Mackey, Cindy McTee, James Primosch and Roger Reynolds. Ellen Taaffe Zwilich, winner of the Pulitzer Prize in Music among many other accolades, is the permanent Chair of the competition.

The BMI Student Composer Awards recognize superior musical compositional ability with annual educational scholarships totaling $20,000. In 2017, nearly 700 online applications were submitted to the competition from students throughout the Western Hemisphere, and all works were judged anonymously. BMI, in collaboration with the BMI Foundation, has awarded over 600 grants to young composers throughout the history of the competition.

For more information and to hear the work of these talented young composers, click here.