Posted in MusicWorld on June 12, 2006 by Kevin Zimmerman 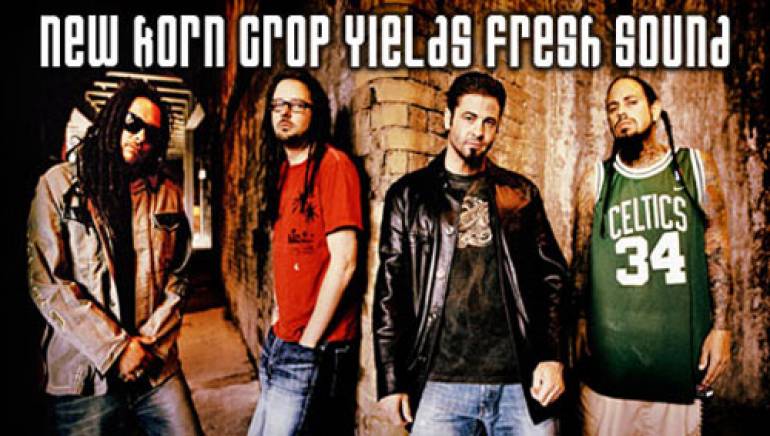 Jumping to a new label and subtracting a longtime guitarist can be a sign of trouble in the rock world, but then alt-metal act Korn has never had much time for playing by the rules.

From the blunt intimations of child abuse on the cover of its self-titled 1994 album through its numerous reinventions (not to mention its hilarious appearance as a "Scooby-Doo"-type gang of mystery-solvers on a particularly memorable episode of South Park), the group has cut a deliberate swath through a sometimes staid music industry.

"Music, I think, in general, totally sucks," remarks lead singer Jonathan Davis. "Corporate rock now is all this pop-punk stuff that's about nothing. Nothing's dangerous anymore. Nothing has any meaning, and that's why it's not selling."

One could be forgiven for filing Davis under the "defeatist" category were it not for the smashing new album See You on the Other Side (Virgin), which finds the group reinvigorated and embracing some state-of-the-art pop touches via songwriting/production team the Matrix (Britney Spears, Christina Aguilera, Avril Lavigne).

"We wanted to go and try this out," Davis explains. "Just think of the crazy, wackiest thing we could get involved with, and it's just really worked out great, because those guys really brought something different to the table."

The result is a characteristically cathartic batch of songs that retains Korn's mix of sturm und drang — "Hypocrites" takes on organized religion, while the target of "Politics" is self-explanatory – but overlays it with a groove that's slinkier than most punters would have expected. Bassist Reginald "Fieldy Snuts" Arvizu and drummer David Silveria have never sounded tighter, while James "Munky" Shaffer effortlessly now does the work of two men, with the departure of guitarist Brian "Head" Welch.

Then there's "Let's Do This Now," whose intro features bagpipes, of all things. "I went to Highland High School [Bakersfield, Calif.], and they had a pipe band there," Davis explains. "I really wanted to learn how to play bagpipes, so I signed up for the pipe band. I actually competed in the games and stuff, got into it really heavy into it and then got into the band."

Possibly even odder was the exit of Welch, who resigned from the band via e-mail after declaring himself a born-again Christian who couldn't continue to endorse Korn's music. Davis now says, "I just wish him the best. There's still a part of me inside that loves him."

Entering its second decade, Korn remains committed to what made it successful in the first place. "We're just taking a stance with, we did sell records, we do sell records, so [the record labels] have to listen to us," Davis says. "We make the records we want to make."