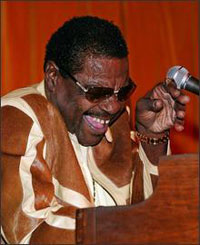 BMI Award-winning songwriter Billy Preston, the keyboardist and singer also known as the "fifth Beatle," died June 6 in Scottsdale, Ariz., after a long illness. He was 59.

Known for his big gap-toothed smile and towering Afro, the Houston-born Preston was a teen prodigy on the piano and organ. He first encountered and struck up a friendship with The Beatles while on tour in Europe with Little Richard in 1962. After lending his gospel-tinged touch to many of their albums (Let It Be, The White Album, Abbey Road), as well for other artists like the Rolling Stones and Eric Clapton, Preston broke out as a solo artist in the '70s, scoring a number of his own hits, including the BMI Award winners "Will It Go 'Round In Circles," "Nothing From Nothing," "Space Race" and "Outta Space," which earned the Best Instrumental Grammy in 1973.

Other Preston-penned classics include the wedding favorite, "With You I'm Born Again," his duet with the late Syreeta Wright, and the Joe Cocker standard, "You Are So Beautiful," another BMI Award-winning song.

He scored the 1970 Sidney Poitier movie They Call Me Mr. Tibbs with Quincy Jones, was the first musical guest on the 1975 debut of Saturday Night Live, and appeared in the films Blues Brothers 2000 and Sgt. Pepper's Lonely Hearts Club Band. Preston also made a guest appearance last year on an episode of American Idol.