Legendary singing trio Crosby, Stills & Nash will be honored as BMI Icons at the performing right organization's 54th Annual Pop Awards set for Tuesday, May 16 at the Regent Beverly Wilshire Hotel in Los Angeles. The invitation-only, black-tie dinner and ceremony, which will also honor the songwriters and publishers of the past year's most performed pop songs, will feature a special musical tribute to CSN. 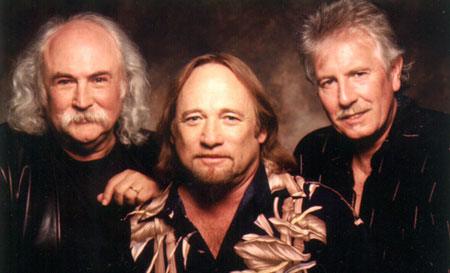 The Icon designation is given to BMI songwriters and artists who have had "a unique and indelible influence on generations of music makers." The Rock and Roll Hall of Famers, whose signature three-part harmony has endured for more than three decades, joins an elite list of previous BMI Icons that includes Paul Simon, James Brown, Brian Wilson, Isaac Hayes, Dolly Parton and Carlos Santana.

The musical partnership of David Crosby, Stephen Stills and Graham Nash has produced some of the most timeless songs ever written, including "Marrakesh Express," "Suite: Judy Blue Eyes," "Helplessly Hoping," "Guinnevere," "Teach Your Children," "Wooden Ships," "Dark Star" and "Just a Song Before I Go." The only American band of the original Woodstock era to have a societal impact rivaling that of the Beatles, Crosby, Stills & Nash has been called "the voice of an entire generation."

Hosted by BMI President/CEO Del Bryant and Los Angeles VP/GM Barbara Cane, the 54th annual BMI Pop Awards will recognize the writers and publishers of the most performed songs on U.S. radio and television from the past year. A Pop Song of the Year, Songwriter of the Year and Publisher of the Year will be announced during the evening, as will the winner of the BMI Foundation's John Lennon Scholarship.