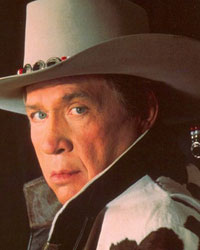 Legendary country singer and original "Rhinestone Cowboy" Buck Owens, known to millions of fans as host of "Hee Haw," died March 25 at his home in Bakersfield, Calif. He was 76.

The night before his death, the long-time BMI songwriter was scheduled to perform with his Buckaroos band at the Crystal Palace, the dinner club he owned in Bakersfield, which is located about 100 miles north of Los Angeles.

"Buck Owens created a sound that captured an entirely new audience for country music and popular music in general," said Del Bryant, BMI's President & CEO. "He was one of the entertainment industry's true pioneers, having so successfully navigated his music, TV and business careers up until his passing. He was an innovator, a trend setter, a musical catalyst whose 'Bakersfield sound' spoke to the purist in all of us. His passion for life lived on right up until his death, and his music will continue to influence generations to come."

With his unmistakable honky-tonk sound, flashy rhinestone-studded suits and signature red, white and blue guitar, Owens owned country music. Born Alvis Edgar Owens, Jr. in 1929 just outside Sherman, Texas, the singer is credited with shaping the sound of the genre itself.

He introduced his twangy "Bakersfield sound" to a much broader audience as co-host of "Hee-Haw," the longest-running syndicated show in television history. The popular country music variety show ran for 17 years and made Owens a household name.

His extensive recording career boasts a string of 19 consecutive #1 songs and 26 top ten hits between 1963 and 1974, among them the BMI Award winners "Together Again," "My Heart Skips a Beat," "Love's Gonna Live Here," "I've Got a Tiger by the Tail," "Above and Beyond," "Excuse Me (I Think I've Got a Heartache)," "Waitin' in Your Welfare Line," and his very first hit, "Act Naturally."

Owens capped his career with one last chart-topper, a remake of "Streets of Bakersfield," recorded as a duet with Dwight Yoakam in 1988. He was inducted into the Country Music Hall of Fame in 1996, the same year he opened Buck Owens' Crystal Palace.

While out of the recording studio for almost a decade, he got involved in several other business ventures, including a TV station in Bakersfield, and radio stations in both Bakersfield and Phoenix.

He is survived by his three sons, Buddy, Michael and John.