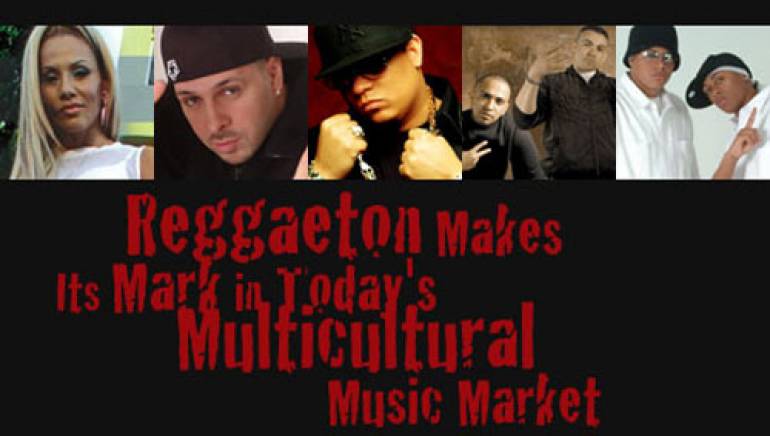 Levitating from the underground to the top of the Latin charts, the genre known as reggaetón has pumped a much-needed shot of vitality into a complex and shifting record market. In the first half of 2005, unit shipments of various formats of Latin music increased a monumental 27.7 percent, a figure attributed in great part to the rise of reggaetón. Correspondingly, mainstream artists have now appropriated the trademark rhythms as reggaetón remixes of tracks from Alicia Keys, Enrique Iglesias, Shakira and even Evanescence shake the dance floors. This cross-cultural popularity has everything to do with the music’s core audience: the growing demographic of young, American-born Latinos, nearly 20 percent of all Americans 34 and younger. They speak English, listen to hip-hop and are more connected in their attitudes than their parents and grandparents were. Reggaetón has also had a global impact, most notably in Central and South America, along with such European countries as France, Germany and Spain.

The genre’s defining feature is a relentless drum-machine track, almost identical across different songs, derived from Trinidadian soca music and Jamaican dancehall and reggae rhythms. This beat is called “Dem Bow” after the beat in a Shabba Ranks song of the same name. Although it emerged from the island of Puerto Rico, reggaetón reflects cross-cultural roots. In the ’70s, Jamaican workers migrated to Panama to work on upgrading the country’s famous canal and the trademark “riddims” they imported were appropriated into the popular songs and styles in this adopted locale. DJs helped popularize this hybrid form of Latin reggae, and by the early ’80s it could be heard mainly in underground settings across Latin America. Meanwhile in Puerto Rico, artists were translating Jamaican reggae into Spanish, and fusing these lyrics with Panamanian-style reggae beats after artists like El General introduced this blend of rap and reggae music to the island. Translating Jamaican reggae into Spanish, and fusing these lyrics with Panamanian-style reggae beats, hip-hop and dancehall, reggaetón was born. DJ Playero, who produced Vico C’s first underground recordings, is one of the pioneers in the introduction of this genre. He produced five reggaeton compilation albums with artists like Daddy Yankee, Yaviah, Mexicano, Big Boy, and Frankie Boy, among others, in the early ’90s.

“The Queen of Reggaetón,” Ivy Queen, is the genre’s undisputed female ruler. Born in Puerto Rico but raised in New York, she returned to the island in the ’90s and teamed up with impresario DJ Negro, who invited her to join a rap compilation label known as The Noise. Ivy Queen wrote and performed her first hit song, “Somos Raperos Pero No Delincuentes,” with them and launched her career as a formidable artist. “Sabes Que Tu,” a collaboration with Wyclef Jean, raised her profile even higher. With her own releases and projects with others — notably El Mexicano, K-7 and Don Omar — she maintains her powerful allure through self-penned lyrics that often speak of her alliance to her native Puerto Rico with pointed pro-feminist messages injected into the rhymes.

Francisco Saldaña and Victor Cabrera — the duo known as Luny Tunes — are often described as “the Neptunes of reggaetón,” owing to their chart dominance and canny knack for inventing hits for other artists. Former kitchen workers at Harvard University, they migrated to Puerto Rico, where they added bachata and meringue to the reggaeton formula and crafted one of the genre’s biggest smashes, Daddy Yankee’s track “Gasolina,” from Barrio Fino, a benchmark release that hovered on the Latin charts for nearly two years. Since then, Luny Tunes has showcased a rotating cast of talent on their own releases. The two’s Mas Flow (2003), La Trayectoria (2004) and Mas Flow, Vol. 2 (2005) — arguably the party album of the year — solidified their reputation as songwriters and artists of note whose productions are conspicuously musical. “We never use samples,” confirms Saldana. “We want to create everything new.”

An illustrious cast of contributors, including Ivy Queen, Pit Bull, D’Mingo and Nina Sky, join Tony Touch on his latest opus, The ReggaeTony Album, proof of his prominence in the genre. Alternately known as “Tony Toca,” the Brooklyn-based DJ has orchestrated massive releases via his mix tapes, beginning with The Piece Maker, featuring the music of Big Pun, Wu Tang Clan, Eminem and others. Also an alumnus of The Noise nightclub in Puerto Rico, the DJ and producer has enriched the genre with his deft productions, grafting the incendiary street smarts of hip-hop to more tropical Latin grooves. With a regular slot on New York’s Power 105.1, Music Choice Television and Sirius Satellite Radio plus choice DJ gigs spinning from Spain to Switzerland, Touch/Toca is among the genre’s foremost ambassadors, spearheading a roster of artists that often includes Vico C and Don Dinero.

His frequent guest artist, D’Mingo, a vocalist, keyboardist and arranger, was originally a more traditional singer. His debut, Que Vacile Mi Gente, (executive produced by Jelly Bean Benitez) presented a salsa-flavored style, while Rumbero Soy upped the Latin quotient considerably.On all of the projects on which he now guests, his distinctive tenor voice connects the high-octane rhythms of reggaetón to the seductive melodies of classic Latin songcraft.

From Hector “El Bambino” to Hector “El Father”: A name change signifies the musical maturation of the artist/producer often compared to his stateside counterparts, P. Diddy or Dr. Dre. In the ’90s, Hector Delgado Roman was one half of a pioneering duo, Hector and Tito, notably the first reggaetón artists with the drawing power to sell out massive concerts in Puerto Rico. In 2005, after a heady 12-year run, Hector launched his solo career with a performance in Pasto, Colombia, to a stadium filled with 60,000 adoring fans. His compilation album, Los Anormales, with guest spots by Daddy Yankee, Don Omar, Wisin y Yandel and others and released on his own imprint, GoldStar Music, sold 130,000 copies in just two days in Puerto Rico. In addition to founding his label, he was the first reggaeton artist to sell out two concerts in the new 18,000-seat coliseum in Puerto Rico. Today, most of these artists have signed contracts with major labels such as Universal, Columbia, EMI and Interscope.

DJ Playero is another notable figure in the growth of the genre, compiling some 39 volumes of reggaetón and helping to launch the careers of Daddy Yankee, Chezina, and Baby Rasta y Gringo, among others.

Reggaetón is clearly a genre of inclusion, and the most accomplished artists now collaborate outside of the genre. Ivy Queen’s Real has pairings with Sean Paul, Beenie Man and Fat Joe, and Luny Tunes anticipate working with Jennifer Lopez, the Black Eyed Peas and Ja Rule. Boundaries aren’t limited to the Caribbean or the East Coast. In Southern California, two brothers, Johnny and Victor Lopez, the duo known as Crooked Stilo, have mixed hard-core rap and cumbias into a stew they describe as “crunketón,” incorporating such far-flung sounds as the regional Mexican bounce of banda and hard core hip-hop. Says Victor, “We grew up with Dr. Dre, NWA and Snoop Dogg. It’s a big influence. We’ve been in this for 10 or 12 years, and we’ve always mixed the Latin and English stuff. It’s just lately that the reggaetón blew everyone out of the water. It’s something new, it’s hot in the clubs and people like dancing to it, plus the words and melodies have something to them.”

With their latest release, Retrasalo, Crooked Stilo advances their genre bending sound. Victor Lopez, who lives in the San Gabriel Valley town of Temple City, attests that he listens to potential beats in his car, “bumping” them before his lyrics arrive. Reggaetón is, he says, a physical experience. “There’s a saying that with the music you can only get the people through their hearts or through their feet. Reggaetón does it through the feet.”