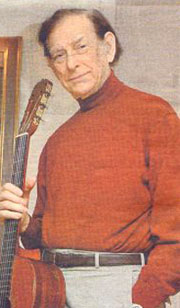 Congratulations to BMI songwriter Oscar Brand, who recently celebrated his 60th anniversary as host of the weekly "Folksong Festival" show on New York public radio station WNYC-AM820. The milestone earned the award-winning program a place in the 2006 Guinness Book of World Records as the "Longest Running Radio Series with the Same Host." The show also won him one of his two Peabody Awards in 1995.

Folksong Festival remains one of the few programs devoted to the traditional and contemporary folk song. Over the years, the show has survived battles with mayors and blacklists. Throughout, WNYC has never censored the program nor prevented it from airing at its regular time.

"I was the only place a lot of singers could get on the air in those years," he says. "And the station backed me 100%. I've always respected WNYC for that."

From his first broadcast on December 10, 1945, Brand has never been paid for his efforts and has essentially marked six decades as a volunteer. His anniversary show featured a round-robin with singer/songwriter Christine Lavine, country blues artist Guy Davis and his old friend Jean Ritchie.

His name can be found among the credits of 75 documentary films, such as Gulf's Invisible Journey and Ford's Highway By the Sea. He has collected Peabody, Ohio State, Edison and Emmy Awards for his hundreds of television shows, and was for four years host of Procter and Gamble's top-rated Canadian series, Let's Sing Out. He was music director of NBC-TV's Sunday Show, Exploring and Treasure Chest series, and was host and composer for The First Look and the NBC syndicated show Spirit of '76. As a leading performer for children on TV, records and films, he served on the advisory panel that created Sesame Street.

Brand is the curator of the Songwriters Hall of Fame, author of seven best-selling books, has recorded 90 LPs, and has written songs for Doris Day, Ella Fitzgerald, Harry Belafonte, the Smothers Brothers and the Mormon Tabernacle Choir. He has been on the faculty of The New School, New York University and Hofstra University, and holds a B.S. in Psychology from Brooklyn College, a Laureate from Fairfield University and an honorary Doctorate from the University of Winnipeg in Manitoba, Canada, where he was born.