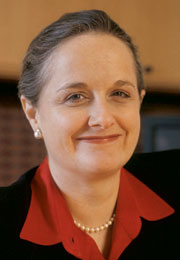 Morris is a third generation broadcaster who began her career at the Hubbard flagship TV station KSTP-TV. Over the years she served as president and general manager of KSTP-AM and KSTP-FM, and president of the Hubbard Radio Network, a syndicator with more than 40 affiliates in the Midwest. A former chair of the NAB Radio Board, she currently serves on the board of the RAB and the Minnesota Chamber of Commerce.

Founded by a group of leading broadcast executives in 1939, BMI is an American performing right organization that represents more than 300,000 songwriters, composers and publishers in all genres of music. With a repertoire of more than 6.5 million musical works from around the world, the non-profit-making corporation collects license fees from businesses that use music, which it then distributes as royalties to the musical creators and copyright owners it represents.