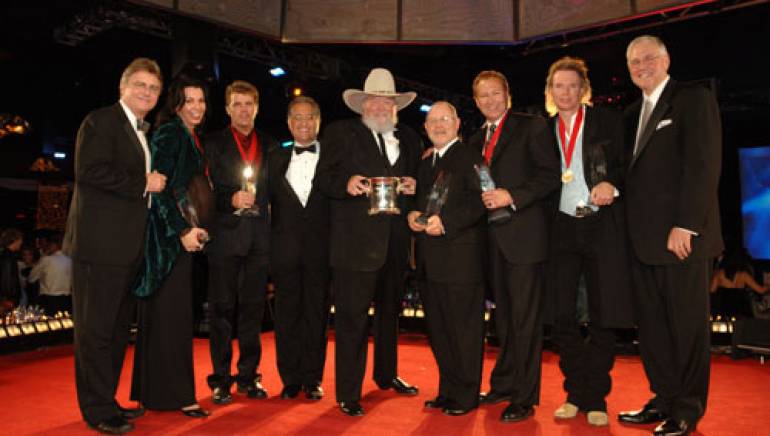 BMI saluted the top country music songwriters, artists and publishers at its 2005 Country Awards, staged October 18 at the performing rights organization's Music Row offices. The black-tie ceremony was hosted by Del Bryant, BMI President and CEO, and Paul Corbin, Vice President of Writer/Publisher Relations, Nashville, who presented Certificates of Achievement to the writers and publishers of the 50 most performed country songs in the BMI repertoire.

Tim McGraw's smash "Live Like You Were Dying," written by Tim Nichols, was named Song of the Year; three-time Grammy winner Harley Allen, Big & Rich's Big Kenny and Lonestar frontman Richie McDonald shared the Songwriter of the Year crown; and Sony/ATV Music Publishing Nashville was named Publisher of the Year. A highlight of the gala was a tribute to legendary artist Charlie Daniels, who was honored as a BMI Icon for his "enduring influence on generations of music makers."

"Live Like You Were Dying" earned the 37th Robert J. Burton Award as Most Performed Country Song of the Year for writer Tim Nichols and publishers Nichols Worth Music and Warner-Tamerlane Publishing Corp. The title track from McGraw's triple-platinum CD, the inspirational hit spent a record-breaking 10 weeks at #1 and won every award for which it was nominated since its release in 2004, including multiple Grammy, CMA, ACM, Billboard, NSAI and CMT awards.

BMI writers Harley Allen, Big Kenny and Richie McDonald tied to claim the Country Songwriter of the Year trophy with three tunes each on the most performed list. Songs earning them the prestigious title were Allen's "Awful, Beautiful Life," "If Nobody Believed In You" and "My Last Name"; Big Kenny's "Holy Water," "Here for the Party" and "Save a Horse (Ride a Cowboy)"; and McDonald's "Let Them Be Little," "Mr. Mom" and "Let's Be Us Again." McDonald also penned BMI's 2002 Country Song of the Year, "I'm Already There."

With 15 songs on this year's list, Sony/ATV Music Publishing Nashville (through its companies Sony/ATV Acuff Rose and Sony/ATV Tree) picked up its fourth consecutive Publisher of the Year Crystal by once again accumulating the highest percentage of copyright ownership in award songs.

The evening culminated in the Icon tribute to Charlie Daniels, which featured a musical salute by country artists Travis Tritt and Montgomery Gentry. With a career that spans nearly four decades, Daniels has connected with millions of fans around the world with his mix of rock, country, bluegrass, blues and gospel.

Songs like "Uneasy Rider," "In America," "Long Haired Country Boy," "The South's Gonna Do It Again," "Wichita Jail," and the Southern rock classic "The Devil Went Down to Georgia," are a part of the American musical landscape. His legendary Charlie Daniels Band, twice named the ACM's Touring Band of the Year, logged more than a million miles on the road, traveling in a convoy of buses and gleaming black tractor-trailer rigs that stopped traffic from coast to coast.

Among Daniels' numerous accolades are multiple BMI Pop and Country Awards, a Grammy, three CMA's, a Dove Award, the ACM Pioneer Award, and several Gold and Platinum albums totaling more than 18 million in sales. His signature song, "The Devil Went Down to Georgia," simultaneously topped the country and pop charts and has amassed more than three million broadcast performances since its release in 1979. In addition to his own successful career, Daniels contributed to recording sessions for a diverse array of artists including Bob Dylan, Al Kooper, Flatt & Scruggs, Ringo Starr and Marty Robbins.


Below is the complete list of 2005 BMI Country Music Award winners: