Posted in MusicWorld on September 15, 2005 by Deborah Evans Price 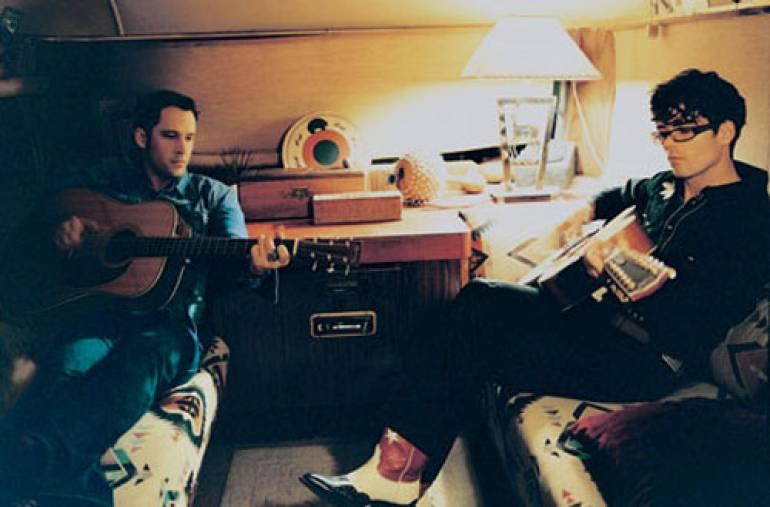 With the August release of their self-titled debut CD, new Dreamworks duo Hanna-McEuen is carrying on a family tradition. Jonathan McEuen is the son of acclaimed multi-instrumentalist John McEuen, and Jaime Hanna is the offspring of songwriter/vocalist Jeff Hanna, both founding members of the Nitty Gritty Dirt Band. The young artists are first cousins, the sons of identical twin sisters, Rae and Kae.

Both Hanna and McEuen are accomplished guitarists and songwriters who have logged more time on the road than many artists twice their age. Jonathan was performing with his dad by the time he was seven. "There were 9,000 people who stood up and screamed and cheered after I sang," he recalls of performing at his dad's annual Rocky Mountain Opry at Colorado's famed Red Rocks amphitheater. "I was in tears because it was so emotional. When you are seven years old and people are sitting and then they are standing and screaming because of something you did, that's when I got the buzz. From then on I knew."

Like McEuen, music was part of Hanna's life early on. After high school, he moved to Nashville to pursue a music career and met Mavericks frontman Raul Malo. "His music affected me and it just totally changed my perspective of country music," says Hanna, who went on the road with the Mavericks, handling harmony, rhythm guitar and percussion. He later performed on Malo's solo dates and the two co-wrote together. "Being in Nashville got me interested in songwriting," he notes

McEuen had been offered a pop deal with Universal, but the seeds for Hanna-McEuen were planted when Jonathan and Jaime recorded "Lowlands" in 2001 for the Dirt Band's Will the Circle Be Unbroken, Vol. III . The song was so well received, it paved the way for their debut disc, which fuses Hanna's Nashville sensibilities with McEuen's West Coast vibe. "It's just the accumulation of influences over the years," says Hanna. "We have very similar tones in our vocals, but we also have very different styles, so I think when you marry the two, it comes out to be what it is."

"We're opening a new chapter," says Jonathan of the duo's musical legacy, "It's something that I just love so much. It's [been] totally worth the wait."