Posted in News on January 23, 2005
Dinner and Ceremony to Be Held April 21 in Las Vegas 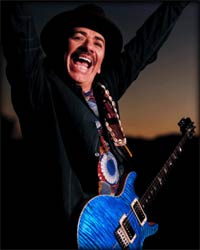 BMI today announced that multiple Grammy winner and Rock & Roll Hall of Fame member Carlos Santana will be honored as a BMI Icon at the music performing right organization's 12th annual Latin Awards. The dinner and ceremony will be held April 21 at The Ballroom of the Four Seasons Hotel in Las Vegas, the first time the awards will be held in that city.

Santana will be the first songwriter honored as a BMI Icon at the company's Latin Awards. The designation is given to a creator who has been a "unique and indelible influence on generations of music makers." He joins a distinguished list of previous BMI Icons, including pop songwriting master Brian Wilson; R&B legends James Brown, Chuck Berry, Little Richard, Bo Diddley, Isaac Hayes and Al Green; Motown songwriting trio Brian Holland, Lamont Dozier and Eddie Holland; blues/rock/soul artist Van Morrison, and country songwriter/artists Loretta Lynn, Bill Anderson and Dolly Parton.

The BMI Latin Awards recognize the songwriters and publishers of the most played Latin songs on U.S. radio and television from the company's repertoire of approximately 4.5 million musical works from around the world. A Latin Song of the Year, Songwriter of the Year and Publisher of the Year will be announced during the evening. Winners from previous years include Ramon Ayala, Intocable, Shakira, Estéfano, Ramon Gonzalez Mora, Emilio & Gloria Estefan, Juanes, Luis Miguel, Los Tucanes de Tijuana, Los Tigres del Norte, Banda Recodo, Juan Luis Guerra and Lupillo Rivera.

According to Diane Almodovar, BMI Assistant VP of Latin Music: "When we created our awards 12 years ago we intended to bring them to each of the major U.S. Latin markets. Our intent holds true. Las Vegas is known for its diversity, and we are very pleased to bring BMI's premiere Latin event there."

The black-tie, invitation-only awards have previously been staged in California, Florida, Texas and Puerto Rico.