Posted in News on January 10, 2005
BMI congratulates neo-soul artist John Legend, whose major-label debut Get Lifted opened this week at No. 1 on the Billboard Top R&B/Hip-Hop Albums chart and No. 7 on the Top 200 chart. The singer/songwriter/pianist, who has worked with various artists including Janet Jackson, the Black Eyed Peas, and Jay-Z, is the 2002 recipient of the BMI-sponsored Abe Olman Scholarship for Excellence in Songwriting. This prestigious award is given annually by the Songwriters Hall of Fame to honor five young composers and lyricists.

Although a newcomer, Legend is no stranger to the urban music scene. Considered the first major breakout star of 2005, he is the vocal prodigy of fellow BMI hip-hop star Kanye West, who makes an appearance on Get Lifted, as do Snoop Dogg and violinist Miri Ben-Ari.

Born John Stephens in Springfield, OH, the 26-year-old musician was definitely an early starter. He began studying classical piano at five and, under the tutelage of his late grandmother, he sang gospel music and played piano at the Pentecostal Church by age seven. He graduated from high school when he was only 16. His first big break came in 1998 while attending the University of Pennsylvania in Philadelphia, where he met Lauryn Hill's back-up singer, Tara Watkins, who brought John to one of Lauryn's recording sessions in New Jersey. After hearing John's demo, Hill invited him to play on her hit single, "Everything is Everything" from her multiple Grammy-winning CD The Miseducation of Lauryn Hill. 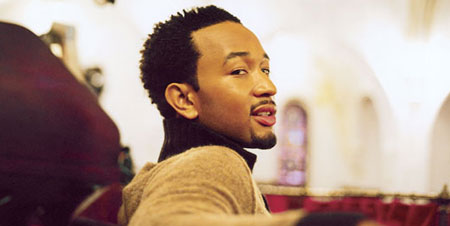 Since then, Legend has appeared on various recordings, including on West's, as well as on albums by Alicia Keys, Twista, Talib Kweli and others. Critics have hailed him as the "soul savior," both for his singing and his songwriting, which defies the cookie-cutter norm of today's urban music.