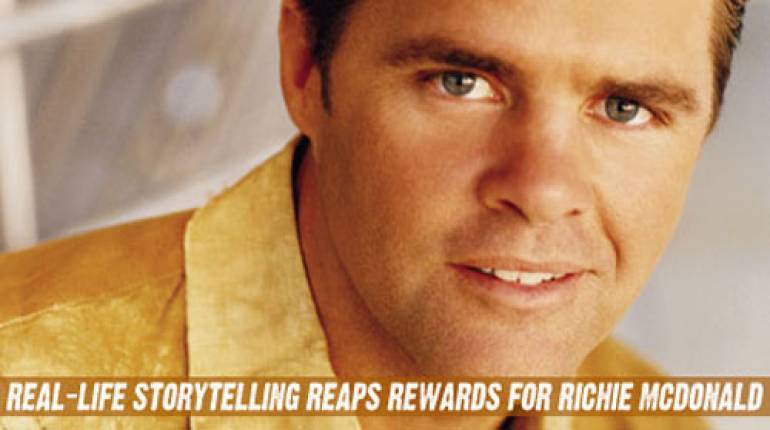 One of Richie McDonald’s most vivid childhood memories is watching the Mac Davis television specials. When they got to the segment where an audience member would throw out an idea and Davis would take it and make up a little ditty right on the spot, the little boy from Lubbock was enthralled.

“I was so impressed with that,” says the multi-BMI Award winner, lead singer and chief songwriter of country supergroup Lonestar. “So when I started playing guitar, I always remembered that and I wrote my first song in, I guess, 8 th grade. When I moved to Nashville, I moved there to be an artist, but also to be a songwriter.”

That beginning as a tunesmith laid the foundation for McDonald’s excellent song sense and skill, and he wrote or co-wrote 10 of the 13 songs on Lonestar’s new BNA album, Let’s Be Us Again, including the top-five title track. In “Somebody’s Someone,” solo-penned by McDonald, the singer empathizes with the loved ones of a fallen soldier. “From There to Here,” a duet with Alabama’s Randy Owen, is an epic tale of three segments of humanity: the Wright Brothers and air travel, a 50-year marriage, and, fittingly for that duo, a band’s rise from obscurity to fame. Another highlight is the #1 single “Mr. Mom,” a real-life look at an out-of-work dad gaining new respect for a stay-at-home mom’s reality.

And it’s that sort of real-life storytelling that has connected Richie McDonald and Lonestar to their fans, both with this album and throughout their career. The 1999 smash “Amazed” spent two weeks atop Billboard ’s Hot 100 chart. The six-week #1 “I’m Already There,” co-written by McDonald, was BMI’s 2002 Country Song of the Year. The multi-week #1 “My Front Porch Looking In,” also co-written by McDonald, was a 2003 BMI Country Award winner. So Richie McDonald knows from a song, as they say.

Now, McDonald and Lonestar -- Dean Sams, Keech Rainwater and Michael Britt -- demonstrate by their lives and careers that longevity comes from within. “The four of us have always had the same goals,” he says. It’s an unerring commitment to the music, to their families, and to the fans. And that focus has led them to pinnacles they dared not dream of when they got together in 1995. The dozens of accolades include CMA Vocal Group of the Year, ACM Top Vocal Group, Song and Single of the Year, and six Grammy nominations. They’ve sold 10 million records, and placed more singles in Billboard’s Top Ten Country Singles Chart than any other artist this decade.

McDonald is quick to give credit where credit is due, first to his bandmates, then to the songwriters with whom he writes the hits. And though the standard writing time in Music City is 10 to 2, he and some of his co-writers like to mix it up and write at dawn -- hence the name of his publishing company, Early Bird Gets the Word. While McDonald prefers his own little writing haven called the Birdhouse -- which is at his home, the inspiration for “My Front Porch Looking In” -- anywhere is fine, as long as he’s with a couple of those great writers. “I love it,” he nearly gushes. “Very seldom do I sit down and write a song from beginning to end by myself. My motto is. ‘Two or three heads are better than one’.”