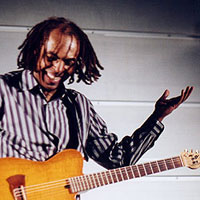 Brazilian BMI composer Gilberto Gil has been named one of the 2005 winners of the Polar Music Prize for his contributions to music. Gil, who is also Brazil's culture minister, will receive 1 million kronor ($137,043) from His Majesty King Carl XVI Gustaf of Sweden at a gala ceremony at the Stockholm Concert Hall on May 23, 2005.

The prestigious award was founded in 1989 by Stig Anderson, manager of Swedish pop group ABBA, through a donation to the Royal Swedish Academy of Music.

The Academy cited Gil, 62, for his "unflinching creative engagement in bringing to the world the heart and soul of the rich music of Brazil," and called him a "unique composer powered by immense talent and curiosity. A unique musical ambassador powered by firm cultural conviction."

Born in Salvador, Brazil, Gilberto Gil joined his first group, the Desafinados in the 1950s and later gained fame as a commercial jingle writer in the 1960s before branching out into protest songs and joining South America's "Tropicalia" movement, melding strains of samba, bossa nova and rock. His first hit single was 1969's "Aquele Abraco." An idol to millions, he was arrested by Brazil's government and moved to Britain where he worked with Pink Floyd, Yes and others, before returning to Brazil in the 1970s.