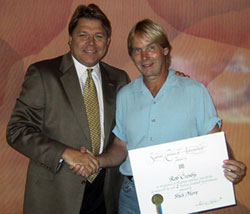 Songwriter Rob Crosby received a BMI Million-Air certificate recognizing two million broadcast performances of "She's More." The tune was released as a single from Andy Griggs' RCA debut You Won't Ever Be Lonely. After hitting #1 on the charts in 1999, "She's More" also earned Crosby a BMI Country Award in 2001. Based on an average length of three minutes, two million broadcast performances is the equivalent of 100,000 hours or 11.4 years of continuous airplay.