Posted in MusicWorld on September 13, 2004 by Joe Morris 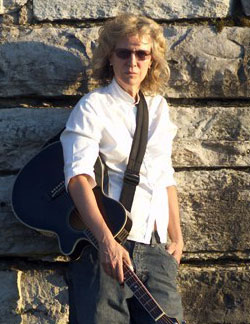 Songwriters are by nature storytellers, and Marshall Chapman does indeed have some tales to tell.

With eight albums to her credit and hundreds of songs written and recorded (including the BMI Country Award-winning Million-Air, "Betty's Bein' Bad"), Chapman's name is well known in music circles. But it's her life that's chronicled in "Goodbye, Little Rock and Roller," and the adventures along the way. Using lyrics from 12 songs to highlight seminal moments, Chapman says the book is less an autobiography than something more "memoir-esque."

From the get-go, she infuses her recollections with details that make this retrospective anything but dull. From a John Prine concert at the Exit/In that was followed by moonshine and a semi-nude awakening amongst the vegetable garden in her front yard to her brother's death, Chapman's wry humor is evident throughout. She's no apologist. Hard partying, rehab, bad romantic choices and eventually finding the right guy are all touched upon.

"There's so much more where that came from," says the South Carolina native, who has called Nashville home since her undergraduate days at Vanderbilt University. "It was deeply wild coming of age in the 1970s, which I say is when the 1960s hit the South."

The budding author learned quickly that writing a book was vastly different than writing songs. A lifelong habit of talking onstage ("People thought I was being cool, but I was covering up the fact that I was nervous so I'd go off on these tangents") had prepped her material, but getting it on the page was a chore.

"It's a hell of a lot longer, for one," she says. "I can write a song in an afternoon, celebrate, sing it at the Bluebird, get instant feedback. With this, I sometimes couldn't see the forest for the trees."

Now in its third printing and with a paperback version coming out in the fall, Chapman says the book has reached people her music never has. (The music's there, too: A companion CD can be found on her website, www.tallgirl.com.) Short fiction and essays are her writing tasks of choice these days, but songwriting -- and songwriters -- are never far from her mind.

"I'm not chasing it like I used to, but every now and then one will squirt out," she says of songs. "And I've got the idea of a whole book of stories about songwriters, about people who've come to Nashville. I talk to friends, have people over for dinner, and make them tell the story about when they first came here. Those are great stories. People drop their whole lives in Des Moines, or wherever, and leave everything that's familiar to come here try and get paid to make up something from nothing. That defines you as crazy."