Posted in MusicWorld on July 25, 2004 by Deborah Evans Price 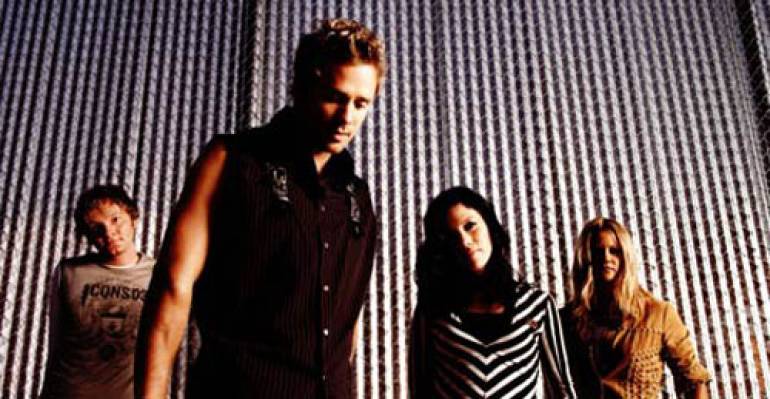 This spring mainstream music lovers are going to discover one of the Christian music community’s best-kept secrets. Lava Records is set to re-release Skillet’s current album Collide and introduce the hard-rocking group to a new audience.

“We believe our music is about a message,” says lead vocalist/principal songwriter John Cooper. “We believe there’s a mission that we have, and the more people who hear that message the better. The message of Collide is about having faith when you’re living in world that is only providing you with fear. That kind of hope is hard to come by in this world.”

Skillet members Cooper, his wife Korey, Ben Kasica and Lori Peters will remain on Memphis-based Ardent Records, which has been working the band in the Christian market, while Lava takes Collide to the mainstream. Produced by Paul Ebersold (3 Doors Down, Sister Hazel), Collide finds Skillet exploring a heavier rock sound than 2000’s Alien Youth .

“We had done the electronic thing for three records,” says Korey Cooper. “We were happy with Alien Youth and it was selling, but for the next record decided to go way less on the keyboards and a lot more just straight rock. And obviously, Paul Ebersold coming into the picture as producer shaped the sound.”

The single “Savior” has already heated up Christian radio airwaves on and in April, Lava took it to mainstream rock stations. The album will be re-issued with one new song, “Open Wounds,” which was penned by Cooper and Kevin Kadish.

“Songwriting is the most important thing in the equation because there are so many great, great bands out there that you can’t make it on just being a great band anymore,” says Cooper. “One of the best things about Skillet is our live performance...but songwriting is why people sell records. It happens when they have a hit song on the radio. I try to put most all my time into writing songs. Good songs will always sell records.”