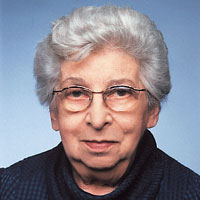 BMI and the BMI Foundation mourn the passing of Theodora Zavin, one of the music industry's most respected copyright attorneys, who served as a senior executive at BMI. Zavin died Monday (June 21) at Columbia Presbyterian Hospital after a brief illness. She was 82.

Zavin served at BMI for 49 years, joining the company in 1952 as head of its legal department, rising to Senior Vice President and Special Counsel at her retirement in 2001. She founded the BMI Foundation, Inc. in 1985, serving as its President until her retirement and President Emeritus until her death.

Zavin was legendary in the music copyright community for her fierce defense of the rights of musical composers both here and abroad. Over her long career she also developed close personal relationships with many seminal composers including John Williams, Lionel Newman, John Lennon and Yoko Ono, John Kander and Fred Ebb, Jerry Bock and Sheldon Harnick, Alan Menken and Maury Yeston.

A graduate of Hunter College, where she was a member of Phi Beta Kappa, and The Columbia School of Law, where she was Notes and Comments Editor of the Law Review, she served as President of the Copyright Society of the U.S.A., was a member of the United States Copyright Office Advisory Committee, and the Copyright Committee of the Bar Association of the City of New York. Internationally, she represented American interests as a leader of the Legal and Legislative Committee of the International Confederation of Societies of Authors and Composers (CISAC).

Zavin combined her legal talents with a deft personal touch with songwriters, composers and music publishers at BMI. In 1965, she was appointed Vice President, Performing Rights, leading the company for more than 20 years during one of its most dramatic periods of growth, personally signing representation agreements with such songwriter/artists as Paul Simon and Art Garfunkel, Billy Joel, Carole King, Mort Shuman and Doc Pomus, and Neil Sedaka, such legendary Brill Building music publishers as Don Kirschner and Al Nevins, and international figures such as Beatles' publisher Dick James.

Zavin wrote prolifically for leading law journals on copyright and was co-author of several books aimed at demystifying and making the law accessible to the layman, including Rights and Writers and Your Marriage and the Law. One of the music industry's best-known hostesses, Zavin also authored two well-received cookbooks, The Working Wives Cookbook with Fredda Stuart, and The Everybody Bring a Dish Cookbook.

Among her many accolades, Zavin was honored by the Entertainment, Arts and Sports Law Division of the New York State Bar Association, by the Young Musicians Foundation, by the Association of Independent Music Publishers, was inducted into the Hunter College Hall of Fame and honored as the Executive of the Year by the United Jewish Appeal.

BMI President & Chief Executive Officer Frances W. Preston said, "Thea has been a leader in support of copyright protection on behalf of songwriters and publishers during her entire career. No one in this industry has contributed more to strengthening copyright. She had an encyclopedic knowledge of copyright law and of BMI's history and its role in American music. We will deeply miss her counsel and her legendary wit."

Zavin married playwright Benjamin Zavin in 1945; he passed away in 1980. She is survived by two sons, Jonathan and Joshua, and three grandchildren, Kate, Nathaniel and Ryan. The family is planning a memorial service. The family said that Mrs. Zavin had requested that friends be referred to the BMI Foundation, which has established a special fund in her name to provide an award to a music student at New York's LaGuardia High School of Music, Art and Performing Arts.