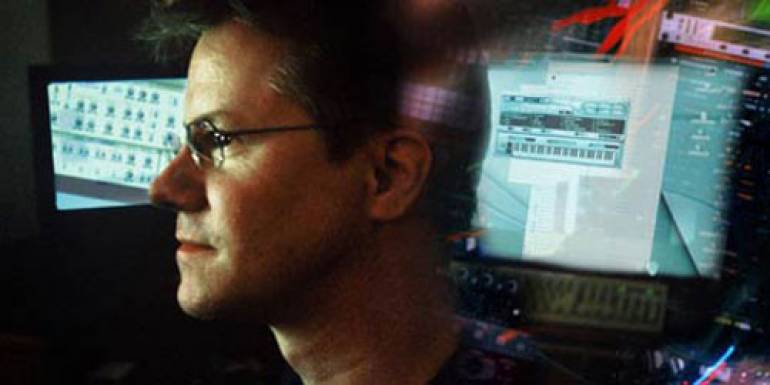 Though “CSI: Crime Scene Investigation” has been an enormous hit almost from the moment it premiered in 2000, Keane, composer of the CBS drama’s score, has scarcely had time to rest on his laurels. “It’s this juggernaut moving forward at an incredible pace,” he attests. “I’m writing 25 minutes of original music each week, and we’re coming up on 90 episodes. It seems like it’s gone by so fast.”

Keane calls much of what he composes for the program “process music.” “The little ticking motors and electronic engine sounds have become a hallmark of the show,” he notes. “They represent the science, the compiling and examination of evidence. So much of ‘CSI’ is not dialogue-driven — it’s ‘show and not tell’ — which gives me an opportunity to drive the scene with music and create a feeling of revelation.”

Before signing on to the #1-rated show, Keane teamed with “CSI” producers Cindy Chvatal and William Petersen on their independent feature film Hard Promises , for which he wrote the main title theme, and the TNT film Keep The Change . Among his other television credits are the main title theme for “The Amazing Race” (CBS), as well as music for “Martial Law” (CBS) and “The Sentinel” (CBS/UPN).

Then there was Keane’s primetime TV variety series, in which he starred with his brother Tommy. As it happens, Keane began his music career at the age of 11. The Keane Brothers released four albums, the first of which, 1976’s The Keane Brothers, was overseen by producer David Foster.

Asked about future musical goals, Keane says he’d like to work in an orchestral setting, but for now, he’s perfectly content. “‘CSI’ has proven to be a great show, and I think it deserves the kind of recognition it’s gotten. I’m just happy to be part of it.”
SOURCEMusicWorld TAGS Film & TV Musicworld Hitmaker Artists David Foster Keane John M. Keane