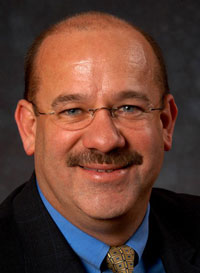 Bruce A. Esworthy has joined BMI as Senior Vice President, Finance and Chief Financial Officer, it was announced today by Frances W. Preston, President & CEO. Esworthy, who was most recently Vice President of Finance for the Tennessee Education Lottery Corporation, assumes the CFO title from John Cody who was named Chief Operating Officer at BMI in November 2002. Esworthy will report to Cody and is based in the company's Nashville office.

In making the announcement Preston said: "We have a responsibility to our songwriters, composers, publishers and customers to insure that our financial health remains sound. Bruce's experience in the financial sectors of manufacturing, technology, and book publishing, as well as his experience in international business, will be enormous assets to us in the future."

"Bruce's strong expertise and varied experience in the financial field, as well as his proven leadership as a Chief Financial Officer, will give BMI employees, affiliates and customers a great advantage," added Cody. "We are very pleased Bruce has chosen to join BMI and that we will have the opportunity to draw on that expertise."

Prior to his position at the Lottery Corporation, Esworthy worked for 14 years in various positions in several divisions of the Ingram Industries Companies. He was Senior Vice President & CFO of Lightning Source, Inc. in Nashville (2001-2003) and Vice President Finance/Administration & CFO at Ingram Micro Ltd., Milton Keynes, UK (1997-2001). He served as Senior Director, Worldwide Internal Audit for Ingram Micro Inc., based in Santa Ana, CA (1996-1997) and Assistant Vice President, Worldwide Internal Audit for Ingram Industries Inc. in Nashville (1989 to 1996). He began his career at Price Waterhouse in Nashville and attained the level of Audit Manager.