Posted in MusicWorld on November 30, 2003 by Rob Patterson 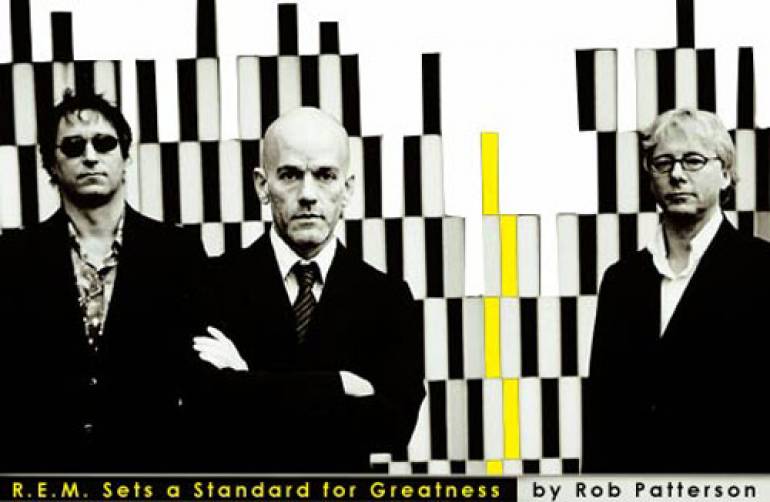 R.E.M. set the standard for alternative rock greatness. The Athens, Georgia-based band has managed to score hit singles like "The One I Love," "Stand," "Losing My Religion" and "Everybody Hurts" and retain the respect of critics, fans and fellow musicians as a group who have sold millions of records yet have never sold out. Their popularity spans the globe and they've by now influenced generations of other artists. And two decades plus into their career, R.E.M. continues as a vital musical force, thanks in part no doubt to the fact that they remain as much fans themselves of music as they are musical superstars.

It's all a rather stunning accomplishment for a band formed by four dropouts from the University of Georgia. Guitarist Peter Buck and singer Michael Stipe met at an Athens record store where they both worked, hooking up soon after with bassist Mike Mills and drummer Bill Berry, longtime pals who had played in bands together since their high school days. After rehearsing in an old church, the foursome played their first gig in April of 1980. "Nobody was thinking of a career, but it was very enlightening to see that we could actually play for people and they would like it," recalls Mills.

Though inspired by the punk-rock revolution of the late 1970s, R.E.M.'s sound had a depth and breadth that encompassed many of the styles that had been hyphenated onto rock: garage, folk, psychedelic, bubblegum and more. An indie single, "Radio Free Europe," on a small Atlanta label, caught the ears of college radio, critics and the burgeoning alternative-rock underground, and launched them onto years of touring and a deal with I.R.S. Records.

With their EP Chronic Town and the album Murmur -- which Rolling Stone anointed as 1983's best album -- R.E.M. became one of America's top underground bands, a stature they solidified with Fables of the Reconstruction and Life's Rich Pageant . Then 1987's Document yielded a Top 10 hit with "The One I Love" and the band ascended to platinum sales status. R.E.M. then moved to Warner Bros. Records with Green in 1988, achieving multi-platinum sales and further hits that would continue through Out Of Time , Automatic for the People and Monster .

After R.E.M. released New Adventures in Hi-Fi in 1987, drummer Bill Berry left the group to live on and work the farm the band's fortunes had bought him. The other three carried on, but also took a well-earned break from their almost non-stop touring. Unhindered by the strictures that massive success often brings, they created some of their most exploratory music on Up and Reveal, as well as recording a soundtrack album for the Andy Kaufman biopic Man on the Moon , which took its name from the R.E.M. tribute in song to the late comic.

Now, in 2003, R.E.M. is back on the charts with In Time: 1988 to 2003: The Best of REM , a retrospective of their Warner Bros. output that proves their continuing vitality and importance, which they underscored with a return to the road. And all along, the group has eschewed the trappings of stardom and remained devoted to being as creative and musical as they can. So it's no wonder that when asked of the secret to their success, Stipe answers the question with typical modesty: "We worked really hard, we had a lot of luck, we had a modicum of talent and we did the best that we could with what we had and it turned out good. In fact, great!"