Posted in MusicWorld on June 17, 2003 by Kevin Zimmerman 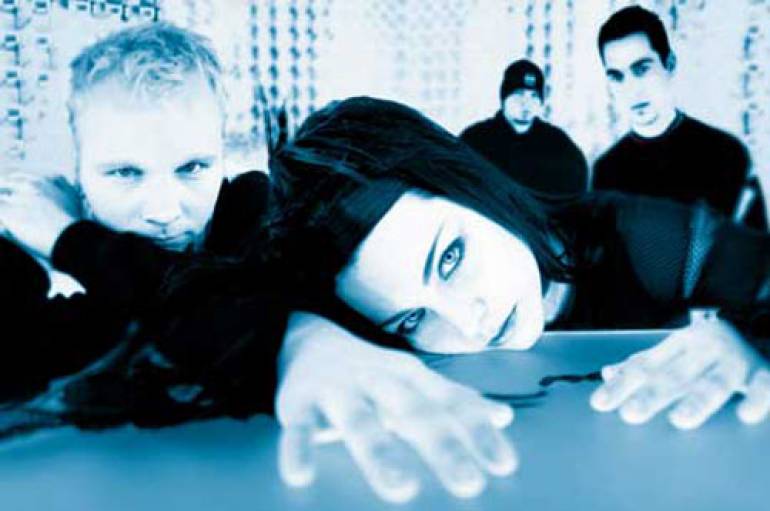 The name “Evanescence” is defined as “a dissipation or disappearance like vapor.” It’s an apt moniker, given that describing Evanescence’s music can be tricky indeed.

The hard-driving single “Bring Me to Life” has led many to classify the group as one of the nu-metal breed; on the accompanying album, Fallen, Evanescence reveals its roots in the goth-rock genre blazed by the likes of The Cure. Add in 20-year-old Amy Lee’s vocals, and the skewed pop vision of Tori Amos becomes readily apparent.

Then, too, there’s the whole “Christian rock” tag, which the band has viewed with some bewilderment; in fact, after some puzzled remarks on the subject by lead guitarist/co-founder Ben Moody in Entertainment Weekly — complete with a certain four-letter word — the album was yanked from Christian retailers and charts.

“We’re definitely a rock band,” says Lee, “but the twist is that the band’s music is epic, dramatic, dark rock.”

Lee and Moody met as teenagers at a youth camp, and clicked immediately. “We have the same exact vision regarding what we love about music,” Moody says. “When it comes to songwriting, we finish each other’s thoughts.”

The vividly emotive “Bring Me to Life,” powered by its appearance in the blockbuster film Daredevil and its own highly theatrical video, has helped Fallen move into the Top 10. Moody says the song “is about discovering something or someone that awakens a feeling inside them that they’ve never had before. You discover there is a world that is bigger than just your safe bubble.”

Augmented by guitarist John LeCompt and drummer Rocky Gray, Evanescence is now embarking on a busy tour of the U.S. and European festivals, during which any confusion about its aims or commitment to music should be safely set aside.

“We’re very sincere about what we do,” Moody says. “There’s so much pre-packaged teen angst these days in music. That’s not us. We’re not trying to sell an angle; we’re just here writing from our heart.”