Posted in News on March 3, 2003
BMI today announced that it is sponsoring two dates of the “Triple Threat” DJ collective tour featuring the San Francisco-based DJ crew made up of Apollo, Shortkut and Vinroc. BMI will be supporting the March 6 show at The Echo in Los Angeles and the March 18 show at SOB’s in New York.

“Triple Threat is a DJ collective featuring three of the most influential DJ’s in the world,” explains BMI’s Director of Writer/Publisher Relations, Myles Lewis. “The group utilizes all forms of music and sound in their sets and their efforts refresh the DJ scene as well as hip-hop as a whole. This is an excellent opportunity for us to show our support for this genre as well as a chance for fans and the industry to see some cutting edge music and musicianship from some of the premiere turntablists in music.”

The collective is currently promoting their Fat Beats Records/BMG CD Many Styles, named after the legendary nightclub where the three DJs met. Showcasing remarkable technical skill and beat diggin’ to create memorable routines, Triple Threat has upped the ante for all DJs and producers when it comes to combining turntablist magic, good ol’ party rockin’ and the foundation of hip hop. 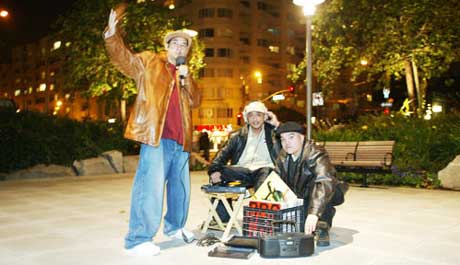 “These cats are the real deal…Super fresh skills and always on time…”, said DJ Z-Trip, Hollywood Records artist; “Triple Threat are the DJs that are going to save hip-hop…” explained artist Bahamadia. “Triple Threat has brought the emphasis back to record selection and takes their audience through a musical journey that all fans of good music can appreciate…” said Rob Swift, X-ecutioners; “…a new chapter for the hip hop DJ, the art form’s foundation...” raved Source magazine. “…Explosive turntable experimentalists…nothing short of Battlestar Galactica…” said the Philadelphia City Paper; and, “These hip-hop artists drop vinyl on turntables and bulldoze existing songs into new sonic temples…” said The Washington Times.

Triple Threat’s Apollo and Shortkut are members of the Invisibl Skratch Piklz, one of the most successful DJ crews in the world. Apollo also was a part of jazz legend Branford Marsalis’ band Buckshot LeFounque. Shortkut is currently winning and competing in more world competitions for DJs around the globe, as well as designing the most influential and standard mixers for DJs worldwide – the Vestax 05Pro. Triple Threat’s Vinroc is considered one of the premiere all-around DJs in the world, having done cuts and performances with likes of Biz Markie, Grand Master Flash, X-ecutioners, Jungle Brothers and Pete Rock. Apollo is credited as the inventor of the art of ‘band Djing’ with current Beastie Boys DJ Mix Master Mike in 1989.

BMI, founded in 1939, is an American performing rights organization that represents approximately 300,000 songwriters, composers and music publishers in all genres of music. Through its music performance and reciprocal agreements, it grants businesses and media access to its repertoire of approximately 4.5 million musical works from around the world.