Posted in MusicWorld on January 15, 2003 by Jon Matsumoto 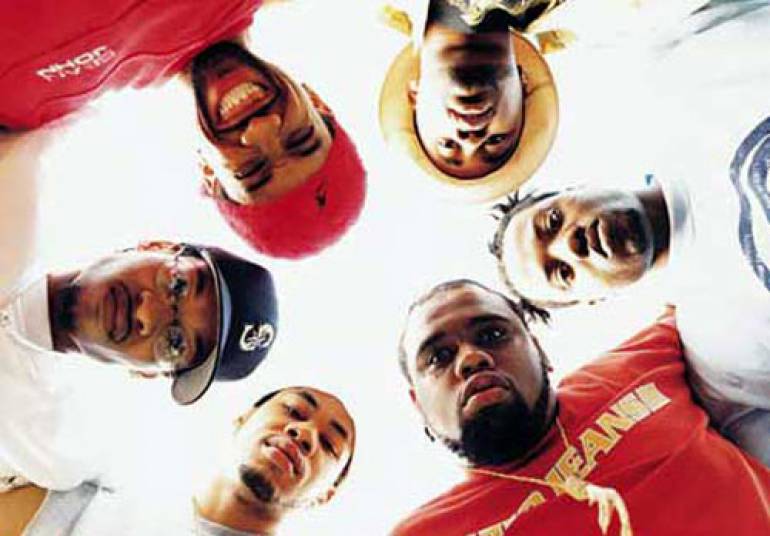 For years, hip-hop’s East and West coasts hogged the headlines.

But thanks to such gifted street poets as Atlanta’s Outkast and Detroit’s Eminem, the rap world has become a far more geographically diverse place in recent years. Kentucky’s Nappy Roots is currently adding to this diversity by bringing a distinctly rural-Southern flair to its fetching hip-hop sound.

The group’s recent CD, Watermelon, Chicken, & Gritz, is less about the boyz in the hood and more about the boyz on the front porch trying to figure out how to make ends meet. With the new track “Ballin’ On a Budget,” the sextet raps about having “no pager, no cell phone, no access at all.” These country-college boys chose to scrimp and save rather than sink their hard earned money into fast cars and fancy jewelry.

The members of Nappy Roots are in no danger of becoming homeless anytime soon. This past October, Watermelon, Chicken & Gritz went platinum.

Nappy Roots first coalesced at Western Kentucky University in Bowling Green (except for member Big V, who attended Eastern Kentucky) in the mid-’90s. While students, they operated a record store near campus with a production studio in the back. When they began creating music, they enlisted the help of fellow students who knew about recording equipment, graphic design and making music videos. Nappy Roots released two independent albums, Country Fried Cess and no comb, no brush, no fade, no perm.

Atlantic Records signed the group in 1998, but the band’s first album for the label (Watermelon, Chicken & Gritz) wasn’t released until 2002. It was clearly worth the wait as well the time and effort Nappy Roots put into this refreshingly organic work, which features a down-home vibe thanks to such elements as organs, harmonies, mandolins and blues guitars.

Now the group is the toast of both coasts and points in between, having become an MTV staple and guests on “Late Night With David Letterman” and “The Tonight Show With Jay Leno.” Make no mistake, rural rap has arrived.