Posted in MusicWorld on January 14, 2003 by Bruce Britt 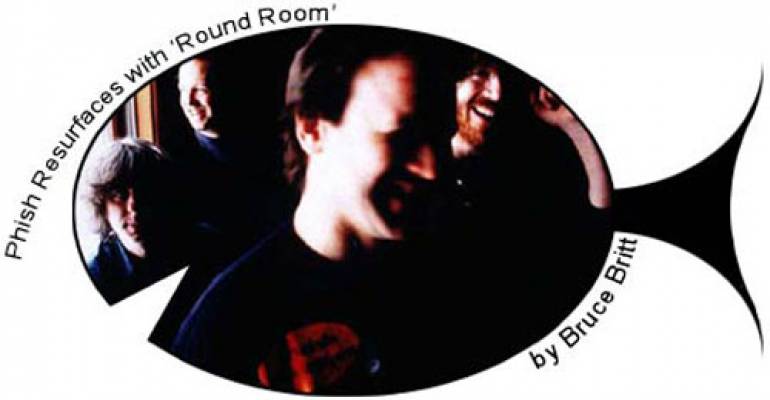 When Phish released its first major label recording in the early ’90s, critics hailed the Vermont foursome as forerunners in an improvisational "new hippie" movement. But when the band quietly dispersed in 2000 for a hiatus of indeterminate length, Phish left a musical void no other band could fill.

So it came as welcome news recently when Phish announced it was finally swimming out of self-imposed exile to spawn its first album in two years. Featuring 12 new compositions, Round Room essentially places Phish fans in the room with the band as they rediscover their unique chemistry.

Phish has always been an inspiring band, but Round Room takes their trademark spontaneity to dizzying new heights. Just weeks after their reunion, the band recorded 20 new songs with the notion of revisiting the material in the spring, when they would convene to record a "proper" album. But the initial studio sessions yielded such good results, the band couldn't see how they could improve them. So Phish elected to winnow the album down to 12 songs and release Round Room as-is.

Arriving on the heels of Phish's trial separation, it's not surprising that Round Room features a number of songs that address the complications of relationships. On the contemplative "Friday," Anastasio sings: "I crashed, I burned, but then I learned to keep my eye on you."

"To make an album so close to the moment of conception is pretty cool," bassist Mike Gordon says. "Because we're still discovering the songs, I think our sense of wonder comes out. It doesn't surprise me that there would be good stuff in that moment. There are many sections in these songs like the cycling chords at the end of ‘Friday’ that remind me how the band is close to my emotional center."

Round Room has Phish fans breathing a sigh of relief -- it was beginning to look as if the members were becoming comfortable pursuing solo projects. Guitarist and vocalist Trey Anastasio released a self-titled 2002 debut solo album and toured with his band Oysterhead, while keyboardist Page McConnell released an album of jazz-inflected grooves with the trio Vida Blue. Drummer Jon Fishman made the rounds with his band Pork Tornado and bassist Gordon collaborated with guitarist Leo Kottke.

But Round Room is the work of an audibly reinvigorated band. "We ripped right into it," says guitarist Anastasio of the new album. "It was all new and fresh, and that was important 'cause that's what we wanted. The thing that struck me was that lots of life had gone by, but there was still continuity to it."

Tremendously instrumental in establishing the current "jam band" craze, Phish proved capable of attracting a single-event audience of 75,000 at their pre-hiatus millennium concert weekend in Florida. Now reunited, the band seems less concerned about drawing similarly large numbers as with playing together again. "We're back, simple as that," says keyboardist McConnell. "We went away and came back recharged, which was the goal."