Posted in News on November 12, 2002
Janis Bamberg from Laguna Beach, Calif. is the winner of the Gibson Les Paul guitar autographed by BMI rockers 3 Doors Down. Presented by Bud Light and sponsored in part by BMI and artist development company RockStar2K, the winner was chosen on November 12 from over 20,000 online submissions. The contest coincides with the release of the band's highly anticipated sophomore album, Away From the Sun. 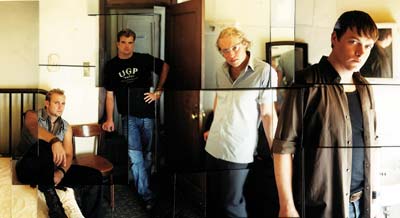 3 Doors Down, who have just returned from a goodwill "Navy Tour" entertaining American sailors overseas, are currently on a Bud Light-sponsored US tour in support of Away From the Sun, the follow-up to the band's six-times platinum debut album, The Better Life. The band is also featured in a Bud Light TV commercial.