Posted in MusicWorld on January 31, 2001 by Gary Eskow 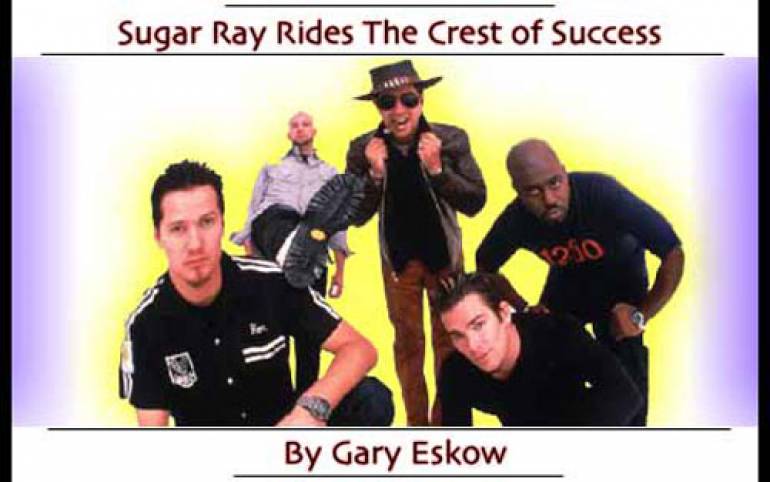 It takes a lot to make it in the music business. Lots of talent helps. Perseverance, the kind that keeps you pushing on when owner of the bar pushes a bunch of bills your way, but they don't cover the parking charges on your van, is a must. A sense of humor helps keep the craziness in perspective.

Sugar Ray has all these qualities in abundance. The band, consisting of lead vocalist Mark McGrath, Rodney Sheppard on guitar, bass player Murphy Karges, drummer Stan Frazier and DJ Crai "DJ Homicide" shook up the music world with the release of Floored in 1997. For awhile it was impossible to spin the radio dial and avoid the hit single "Fly."

But Sugar Ray wasn't counting on running the table with one hit after another, despite the fact that they became media darlings. "No one makes more fun of this band than ourselves," says McGrath. Figuring that they'd have to fight their way out the "one-hit wonder" bag anyway, Sugar Ray decided to have fun when it came time to title their third Lava/Atlantic album. "It was a great run with Fly," says McGrath, adding that the group decided to call the latest release 14:59 as a humorous take on Andy Warhol's famous comment that one day everyone would be famous for 15 minutes. "If the album fails miserably, it's genius, and if it succeeds, it's still genius." Murphy Karges adds, "We just wanted everybody to know we weren't taking ourselves too seriously, and we were well aware it could all be over tomorrow."

The band's approach to writing is pure collaboration, no ego. "Someone will write a verse," says McGrath, "someone will write a chorus. It's amazing because we each take our influences, what we were raised on, and then we throw it in the mix and it just seems to come together."

Shuffle beats, folk harmonies, pop and soul harmonies all find their place in the stew that Sugar Ray cooks up for their fans. In addition to their own continuing development as writers, the band gives high praise to the contributions of David Kahne, who produced Floored. "David's become our George Martin, if you will," says Murphy. Kahne's client list covers a wide territory, including artists as varied as Tony Bennett and Romeo Voice.

The band also had the opportunity to work with legendary hip-hop artist KRS-One on Floored. The founder of Boogie Down Productions teamed up with the group on the track "Live and Direct." The band is staying humble as well, as McGrath says that "to be in a position to collaborate with someone like KRS-ONE is truly amazing."