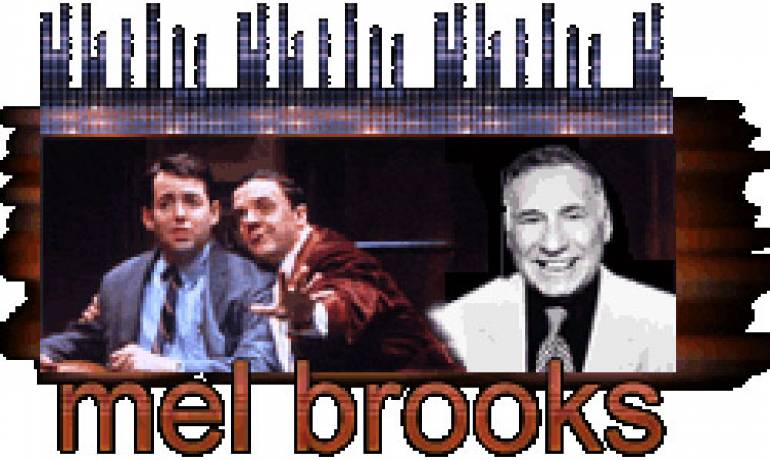 Mel Brooks is making Broadway history. Brooks's smash hit Broadway musical, The Producers, just broke all previous records by winning twelve Tony Awards, besting the 10 won by Hello, Dolly! in 1964. Three of the coveted awards, Broadway's highest honor, go to Brooks personally. He is the winner of the Best Score for a Musical, Best Book for a Musical (shared with co-author Thomas Meehan) and Best Musical of the 2000-2001 Broadway season. In addition to the record-breaking number of Tony Awards, the show received 11 Drama Desk awards, eight Outer Critics Circle Awards, The New York Drama Critics Circle Award for Best Musical and the Drama League Award for Best Musical.

The Producers has been selling out since its out-of-town tryout in Chicago and has been breaking Broadway box office records. The show, budgeted at $10,000,000, is projected to return the investor's money in a mere 35 weeks.

During the June 3 live telecast, veteran screenwriter, director and producer Brooks quipped: "I'm going to have to do the hardest thing I've ever done in my life - act humble."

Backstage at Radio City Music Hall, site of the 2001 awards, Brooks told reporters that winning the Tony for Best Score was "the most meaningful. I love Cole Porter, Frank Loesser, the guys who wrote the music and the lyrics, who deliver a song. If I could join that rare bunch of guys, it would mean so much to me. I love music first; my second love is Anne Bancroft." Earlier that night, Brooks publicly thanked his Oscar-winning wife for "sticking with me through thin."

The show is based on Brooks' 1968 film of the same name, which won him an Oscar for Best Screenplay. Brooks went on to write and direct a dozen classic screen comedies including Young Frankenstein, Blazing Saddles, High Anxiety and Silent Movie.

Brooks initially thought the property was a piece for the theatre, a comedy with music. He wrote two songs, "Springtime for Hitler," the show's extravaganza centerpiece, as well as the jailhouse finale, "Prisoners of Love." No theatrical producer would touch it, claiming there were too many scenes, too many characters and too many musicians in a pit band that would only play for two musical numbers.

The classic comedy tells the tale of a down and out Broadway producer (Zero Mostel in the film, Nathan Lane on Broadway) who is in cahoots with a nerdy accountant (Gene Wilder on film; Matthew Broderick in the stage version). The two raise money for the world's worst show, a musical based on the life of Hitler, with the intention of running off with the surplus of cash once the show flops.

Media mogul David Geffen had been urging Brooks to fashion his classic comedy into a Broadway show for years. During the Chicago tryout of the show, Brooks remembered that his first idea was to take the existing songs from the movie and have Broadway composer Jerry Herman (Hello, Dolly!, Mame) write the balance of the score.

Brooks recalled: " I went to see Jerry. As soon as he heard the proposal, he sat down at his piano and played about eight songs, all of them mine. 'I'm Tired' from Blazing Saddles, High Anxiety and so on."

Herman urged Brooks to write it himself. "You've already written 'Springtime for Hitler.' That's your 'Mame.' That's your 'Hello, Dolly!' Just go ahead and write more."

Brooks confesses he is a "hummer," a natural composer who comes up with the melodies and leaves it to others to transcribe and arrange them. "I've had the help of Glen Kelly, a musical genius. And Patrick Brady, another genius, who did the vocal arrangements and is our conductor." The veteran film director wisely chose multiple Tony-winner Susan Stroman to serve as director/choreographer for the show, which added two more Tony Awards to her collection.

Musical theatre isn't new to Renaissance Man Brooks. "I wrote a lot of songs before The Producers when I worked on the Show of Shows on television in the '50s," he notes. He cut his Broadway teeth on the famous "New Faces" reviews in the 1950s and wrote the book for 1962's All American, which starred Wizard of Oz Scarecrow, Ray Bolger.

"I wanted to write the score for this musical, but nobody was sure I could write songs. They knew I could write lyrics, but they didn't know I could write music." Brooks credits his writing partner for the book, Tom Meehan, for showing him where the show talked and where the show should burst into song. The Sony Classical Original Cast CD is flying off shelves while theatre-goers are buying tickets as far ahead as Christmas, 2002.

The show has also sparked controversy because its humor takes politically incorrectness to new levels. Brooks's definition of equal opportunity offers the chance to offend virtually everyone, and the results have Broadway audiences clutching their sides in laughter. Some theatre-goers have taken offense at what they perceive as the trivialization of Hitler and the Holocaust.

Brooks responds: "Hitler was part of this incredible idea that you could put Jews in concentration camps and kill them. . . . How do you get even with the man? You have to bring him down with ridicule, because if you stand on a soapbox, you're just as bad as he is, but if you can make people laugh at him, then you're one up on him. It's been one of my life-long jobs - to make the world laugh at Adolph Hilter."

Exactly what standing room audiences are doing eight times a week on Broadway.